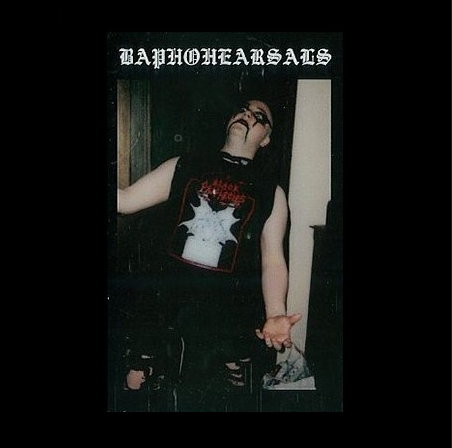 Last month the Belgium Black Metal horde of Forbidden Temple released yet another chapter in their ever-growing discography. The band has a tradition of releasing raw rehearsals and demos and in that same light they are now releasing a self-financed tape with eight songs recorded in February and March of this year.

Besides the familiar duo of Tenebrae and Agaliarept, an unknown third person now joins in, hiding under the sign of L and providing the keys. Although it obviously does not sound symphonic at all, those keys are an important part of the always enigmatic sound of this illustrious Belgian act. That sound, already set out on the band’s previous releases, is continued on these eight tracks (including intro and interlude) without further additions or trival frills. Apart from ‘Blasphemous Howling’, which previously appeared on ‘IV’, we are presented with all new songs. Most startling is perhaps the cover of Abygor, ‘The Faces Of Pentagram’. Abygor was a very obscure Brazilian Black Metal band that only released one demo tape in 1992. One wonders how, as a band, you end up covering such an unknown act like Abygor. Nevertheless, a successful experiment. The rest of the (own) songs are entirely in line with the now quite familiar Forbidden Temple style, raw but with a deep layer of tucked-away melody and an extremely authentic sound. The choice of a cover of Abygor and the band members’ choice of band shirts on the various photos and covers speak volumes in this regard. For fans of ultimate raw underground Black Metal with a stylish, organic 90’s sound, Forbidden Temple is always a treat, and this rehearsal tape is no exception. It’s available at the better underground Black Metal speciality shops.