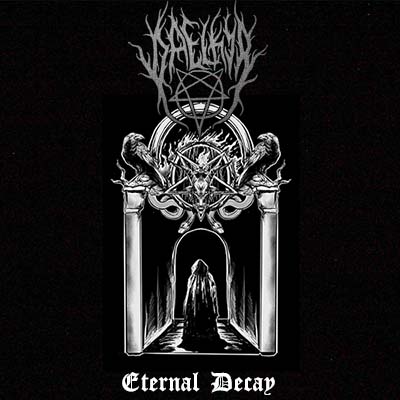 “Eternal Decay”, on first listen, is clearly influenced by second wave Scandinavian Black Metal, to the point where I was surprised to learn that they are actually from Turkey. The band formed in 2018, according to Metal Archives, but “Eternal Decay” is the first release by the project. Coming in at under nineteen minutes over the course of four songs, Daelkyr does enough to whet our appetite for more, without overstaying their welcome.

While it is clear that Daelkyr are doing nothing to reinvent the second wave wheel, they do present a top notch product. There’s nothing on “Eternal Decay” that hasn’t been done before, but that’s alright. The riffs are strong and melodic, washing over the listener in waves of familiar darkness. The drums have variety and metronomic rhythm. The vocals are solidly serviceable. The production is clear without being too polished.

“Eternal Decay” is a great release for all who love the second wave sound, as I do. It’s not too original, but quality enough to stand above others. Given that this is an initial offering, it’s my hope that Daelkyr find a way to separate themselves from the pack and make themselves unique, without losing entirely the second wave tendencies. A very solid release that is worth your time to check out. (Hayduke X)