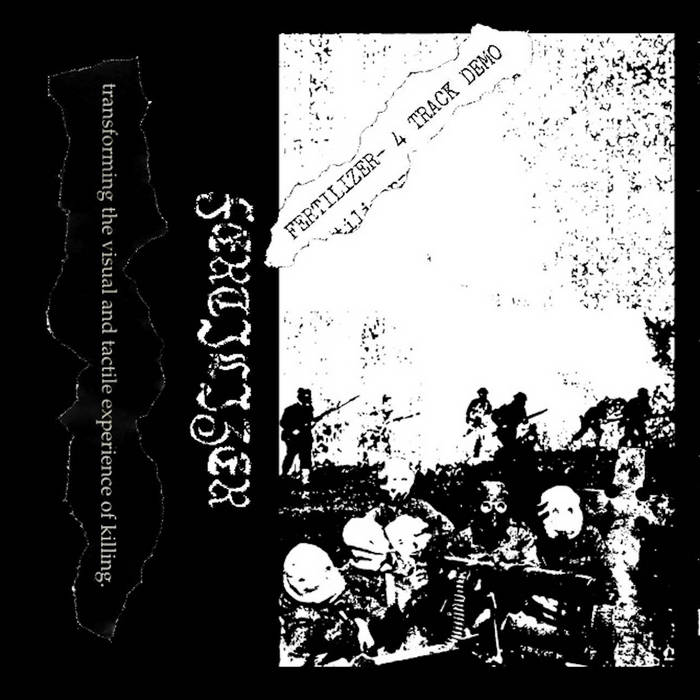 As of late Canadian Black Metal is best known for the somewhat more refined and at the same time furious Black Metal scene, bands like Sorcier Des Glaces, Forteresse, Cantique Lepreux, Monarque and Crépuscule are throwing up big buzz. Whether that is justified or not will be a matter of taste, but the also Canadian-based Fertilizer apparently disregards all of that. They draw their influences from completely different vessels and show this on their first demo, simply titled ‘Demo’.

Fertilizer’s base is gritty and raw Black Metal, but has an equally raw Punk vibe built into it and doesn’t shy away from the requisite Noise either. While this kind of cross-fertilization (!) is not all that uncommon, a direct comparison is not very easy to draw. The closest thing is the primitive minimalism of Bone Awl and the totally bizarre Raspberry Bulbs. If you’ve heard Fertilizer’s songs a few times, you can trace back even more from both Black Metal (Ildjarn) and Noiserock (Unsane, Deadguy, Kiss It Goodby, Whores or early Helmet) and the English Punk scene from the early 80’s. A band like Fertilizer demonstrates well that there is no need to think in tightly defined pigeonholes and that lumping together everything you think is cool can grow into a smashing result. The rough riffs, the deep and rocking bass guitar, the noisy feedback, the maddening and overdriven screams: it all works excellently but you might have to have a somewhat trained ear for it or just fancy a good fucking slab of noise. That’s also possible.

The front cover, by the way, mentions this demo having 4 tracks, but I really count 5 of them. Whether this is a joke or a mistake is not entirely clear, but at least you get an extra track with it. For now, this demo is only available digitally, but I’m sure this will also be released on cassette tape through whatever label.