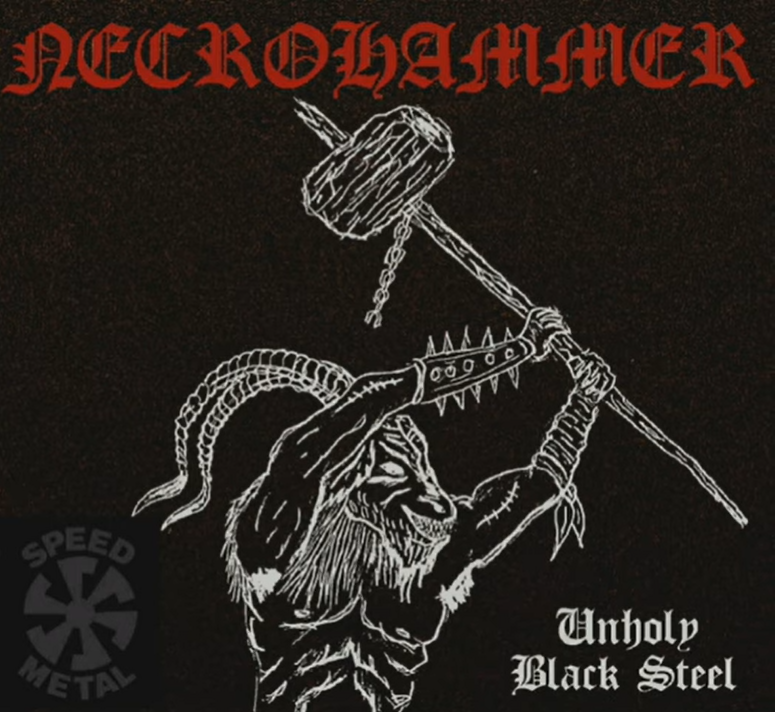 Old School bestial Blackened Speed Metal fans of the world, rejoice! After a 2020 demo tape and a split CD (Bestial Possession, Profanación Sepulcral and Goatslaught) a year later, the Mexicans of Necrohammer are back with a new EP. Those who have heard the previous work of these three gentlemen know what to expect.

Necrohammer is an open book: when you read the band name, look at the cover art and the font in the logo and go through the song titles, you immediately know what you are dealing with. When you listen to the EP, after an ominous intro in which you hear lapping water, frogs, maniacal panting and a church bell, you are treated to a sudden burst of primitive Hellhammer-styled riffs and an equally savage ‘ough’. It’s as if time has stood still, you get a wonderfully authentic mix of everything from the primeval days of extreme metal: Hellhammer, Sarcófago, Venom, Motörhead, Mutilator, Sodom, Bathory and Sadistik Exekution. The tempo is usually quite high with the spontaneous and fierce sounding riffs flying around you and the vocals have a very tasty excess of reverb and are very loud in the mix. When the band does slow down, we also hear some influences from more classic Heavy Metal, for instance on the instrumental ‘Ritual’ a clear fondness for the (very) early work of Judas Priest comes through. This 8-track EP, including intro, has a playing time of under 25 minutes, but is therefore extremely effective and deadly. So, yes, Necrohammer gives you exactly what you were hoping for when you clicked on this article.  (FelixS)