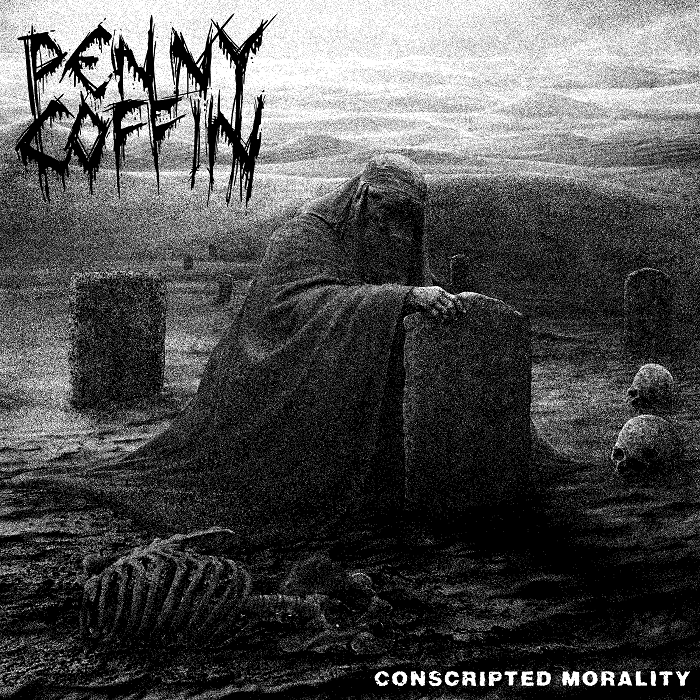 There is a new EP release immanent from Scottish/Greek pedlars of the foulest of Death Metal, Penny Coffin. Their new ‘Conscripted Morality’ EP starts powerfully and marauds onwards with pillaging aggression and bloodthirsty abandon. Opening track ‘Ballistic’ instantly showcases a new direction in terms of style for the band, with trigger like drumming brutality from the off, and a far rawer tone to the deep growled vocals. In fact, so mechanical sounding is the drumming and the vocals that I’d be compelled to say there is just a touch of the Industrial about them. Ah but the guitar leads are the Penny Coffin of old; satisfyingly old school, and drenched with barbaric groove, though this time around there is some hauntingly atmospheric rhythm guitar in the mix that gives the overall effect a grinding, uneasy edge.

If the opening salvo had a reverb covered Mortician/Industrial vibe, the chug heavy bass propelled ‘Predator’ furiously lives up to its name with a romper stomper display of pulverising drum tones and savage riffs, again topped off by the same gruelling vocal vulgarity, before finishing off with more chug happy brutality and catchy Death Metal showmanship. It’s back to the Mortician influence in the distorted opening tones of ‘Slowdive’. Once the track kicks in properly there is some good old fashioned ripping and shredding Death Metal with a distinctly Floridian vibe  to the punishing rhythms, until the bands darker, more carnivorous tendencies once more kick into gear and their deathly intensity cranks up a few notches for some slow paced, grinding death dealing! Its here that the bleak and furious guitar leads really take hold of proceedings by the throat and lay down some truly horrific, bestial carnage!

Penny Coffin close out this magnificently barbaric EP with the morbid and bleakly atmospheric title track ‘Conscripted Morality’, and it brings to a close a real showcase in progression and sheer brutality. Penny Coffin have adapted their sound magnificently from what was already an impressive style, into a raging, crushing beast. This EP is light years ahead of their previous work in terms of the savage guitar melodies the create, the new rawer vocal tones and the overall destructive new sound they concoct as a whole. An utterly brilliant new Death Metal experience from one of the most exciting bands around on todays scene.