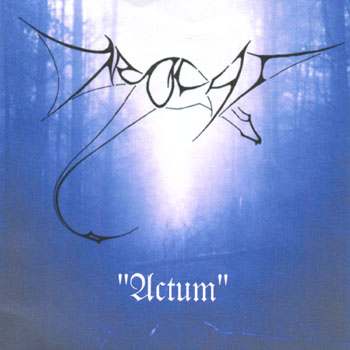 Krocht is a new black metal band from Groningen; the Netherlands. ‘Actum’ is the first demo from this band, immediately you can hear on this demo that all members already got some experience with playing in bands and creating music. Because the 3 songs (and an intro) are played structured, although the sound of it isn’t optimal.

Krocht plays grim yet melodic black metal with atmospherically keyboards that reminds me at some moments to a band like Taake; yet a few seconds later I can hear early Dimmu Borgir influences. So during the songs it becomes clear that Krocht is still searching for an own identity. But all in all I can truly appreciate this demo because songs like ‘Onder Duitschen Rijksvlag’ and especially the last one ‘Trefzeker; Den Dood Nabij‘; a great songs with a melancholic character, exiting composition and some stirring guitar riffs combined with desperate screams in the Dutch language, are absolutely rising above most demos in the nowadays black metal scene. ‘Actum’ is a good demo which is definitely worth checking out!