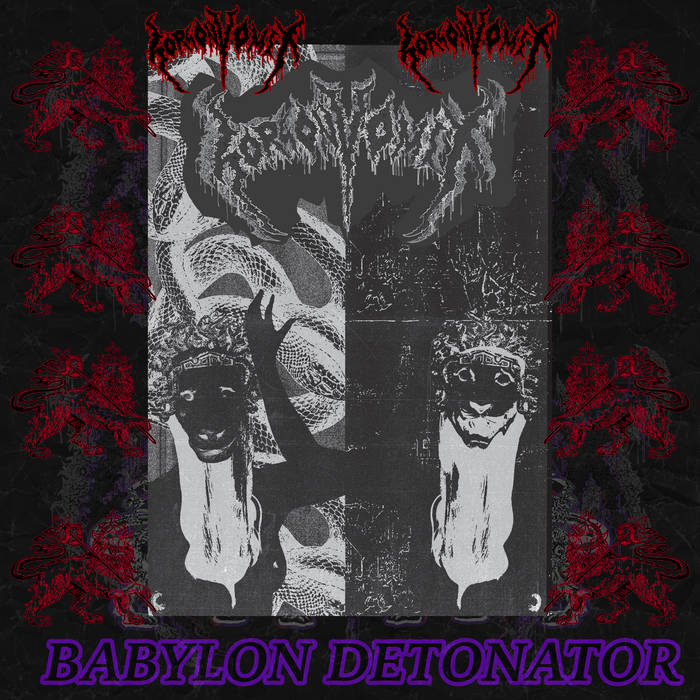 This ugly creature crawled straight out of the London Dungeons and calls itself Gorgon Vomit. Named after the vomit of the gorgons, the three daughters (of which Medusa is the most famous) of the sea gods Phorcys and Ceto from Greek mythology. The music of this depraved trio has nothing to do with Greek (black) metal, all the more with vomit.

Sometimes you don’t really need to do anything as a reviewer if the band has already done all the work themselves. Gorgon Vomit gives the listener of ‘Babylon Detonator’ the following context:

“We are about empowerment, individualism, freedom and pride. Any man who don’t rate it can fuck off and suck der muddas. Mediocracy, half efforts, and easy music will not be tolerated. Full force XXXL Bestial Death Metal. Jah Retch”.

In fact, I don’t have that much to add here. Bestial Death Metal is indeed what we are presented with. However, where many bands in this style follow the steps of, say, Blasphemy, Proclamation, Conqueror, Archgoat or Black Witchery, Gorgon Vomit sounds much more shrill in tone, coming pretty close to Sadistik Exekution. Wild and seemingly uncontrolled. The screaming and the a-musical solos, the frantic rifs, the rattling drums and the caveman-like vocals sometimes seem to race through each other like madness, with the common thread seeming to be completely lost at times. Yet it all sounds particularly spontaneous and energetic. The somewhat awkward samples, of which a puking woman is the perverse low point, give the whole thing an even nastier and vile atmosphere. The somewhat mechanical sound certainly contributes to this as well, even touching on very overwhelming industrial, without really taking the same approach there as, say, Laibach. All in all, Gorgon Vomit shows here on this first 4-track demo a special and original take on the Bestial Death Metal style.