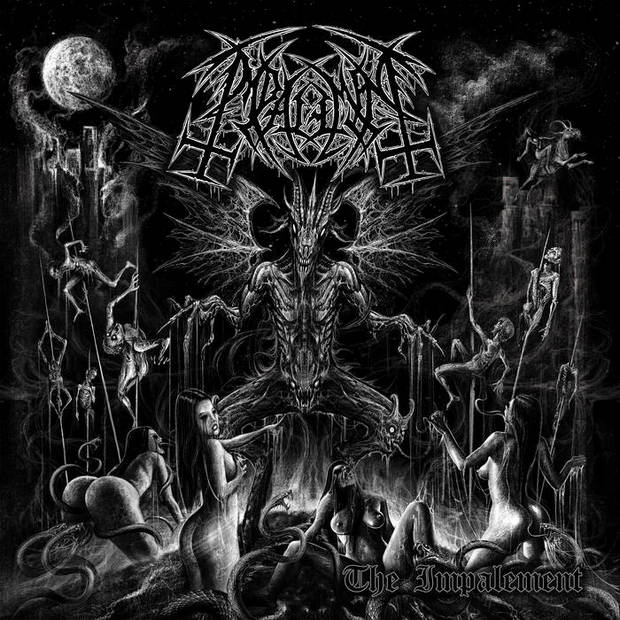 Impalement from Switzerland are an outfit, all centered around the multi-musician/instrumentalist/mastermind of Beliath, who is a seasoned and very experienced musician, with bands such as Mor Dagor, Nargaroth (as a live musician) on his resume.

This “The Impaled” album is his first solo effort. It is said on the info sheet that he plays all instruments with the exception of the drums, which are taken care off by Torturer from Mor Dagor.

Vocals are extremely savage, downtuned in true Death Metal style, feral and blasphemous, teaming with aggression, with dubbed parts and added choirs. The full works so to speak.

Production wise, “The Impalement” is a real treat for the audiophile with tons of special effects like chimes, female spoken parts, subtle effects and so on. It all sounds solid, heavy and well lubricated without being too polished. And the music does slow down, it because a vicious beast, revealing its extreme Death Metal side.

Impalement do remind of other Scandinavian bands such as: Dark Funeral, Dissection at their best, even some Necrophobic and other elite Swedish/Norwegian acts. No to mention all those finger licking twin guitar solos, old Gothenburg style.

Nonetheless Beliath avoids to sound as one of those examples – he just pounds, roars and shreds in his own fashion – infusing brutal Death Metal with aggressive Black Metal.

This entire album is one big adrenaline boost.

Not only is it well produced, brutal, in general past paced and loaded with cold, harsh epicness. It also manages to sound very convincing and avoiding the main stream of predicable Black/Death Metal music.

It’s an amazing first effort, infusing Black Metal with Death Metal. And as it is said: a hybrid is almost every time superior in nature.

Those who really dig versatile and multi-layered brutal Black/Death Metal with strong hints to the Scandinavian scene are cordially invited to check out this truly sublime Impaler – “The Impalement” album. (LCF)