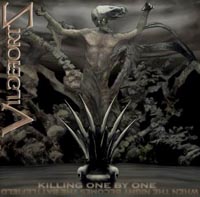 Vilgefortz is a Polish band. When visiting their site I saw them as a four piece band while the booklet of this demo speaks of a five piece band. Since this demo was recorded over a year ago I’ll assume that their site is correct and that the four piece combat outfit is the current and correct line-up. Vilgefortz plays death metal. Rather varied death metal with touches of thrash and melody included every now and then and also ‘light’ death metal.

The music has got a sphere around it that reminds you a bit of death metal in the beginning of the 1990’s, mainly because of song- and riffstructures, and also the velocity with which they play their music. Their music is mainly on some sort of mid-pace/up-speed level that sometimes lashes out to high speed but never becomes a blastbeat. Musically the songs are quite alright and they are nicely written, though it can also be seen as standard executions and their isn’t that much of originality to be found either. In the slower parts I noticed I wasn’t always able to keep my head still and this reflects the catchyness that at times is definitely present. These guys also include some cool solo’s in their music and this gives it a nice extra. The songs have got an angry undertone, in which you’ll recognize more of the thrashy elements, but do not flow over of power, and this is something that kinda misses.

The music has a sort of “easy-going” character, so don’t expect high-speed flashy riffing or uncontrollable breaks, but more balanced and eased death metal. This is why I also called it ‘light’ death metal. It’s just where your taste lies. All in all this is a nice demo with four tracks and a good production but not really a band that jumps out of the mass because of any specific features. (DannyB)