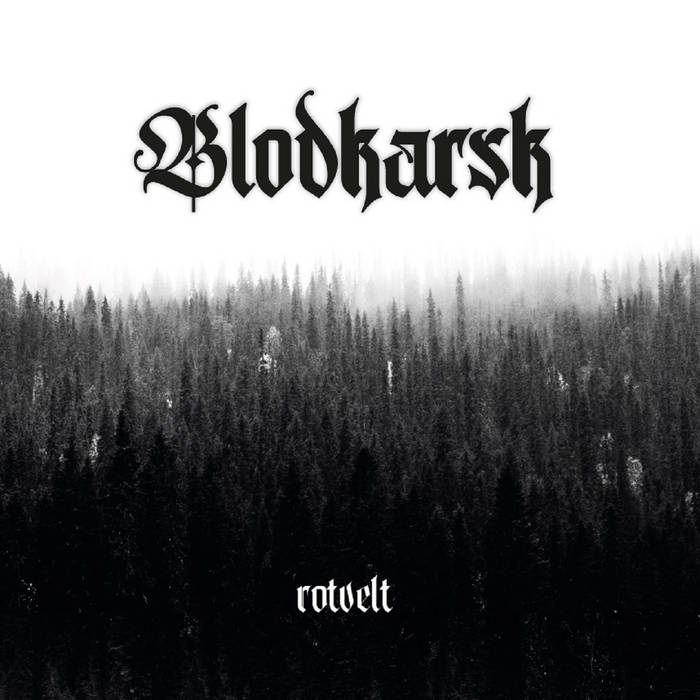 It has been nearly two decades since the inception of Blodkarsk, but after all that time and and after such a lengthy hiatus, the Norwegian Black/Pagan Metal trio have finally returned; still with two original members, bassist/guitarist Erik Elden, and vocalist Robert Gabrielsen, as well as new drummer Andreas Langås who also beats the skins for Death Metal outfit Horrifier, a band whose demo review I’ve posted recently on this site. A new drummer isn’t all that this blackened Triumvirate have come armed with. They also have a brand new debut album entitled simply ‘Rotvelt’, which has been released through Cold Northern Breeze Records on CD.

I can’t tell you too much about the lyrical themes that run through ‘Rotvelt’ as the lyrics are in the bands native tongue of Norwegian, but musically Blodkarsk sway backwards and forth between a bleak, windswept style of intensely melodic guitar rhythms such as during opening track ‘Fjelltausa’, supported by a fluid backline of drums and bass, to the more full throttle and direct riff approach of ‘Blodkarsk’ which uses blast beats to hammer out a furious rhythm, interspersed with more soaring, abrasive guitar melodies. Blodkarsk also manage to churn out catchier tunes such as ‘Knoka banki’ which has a more flowing, rhythmic groove to it, whilst retaining the bands bleak, harsh tones, and even instilling a few darker vibes into the sound.

Clearly this new and revamped Blodkarsk have all their ducks in a row, because this long awaited debut offering is an engaging and potent listening experience!