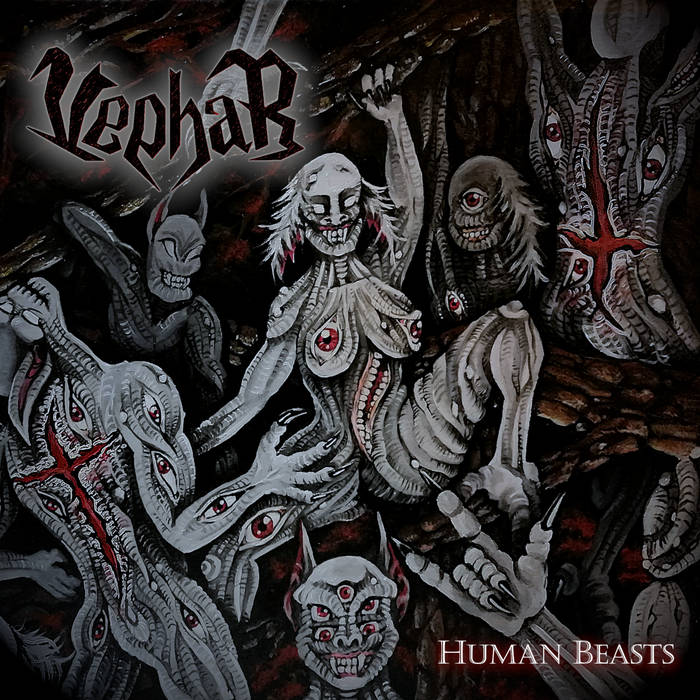 From the Lower Silesia region of Poland comes a Death Metal duo by the name of Vephar, who in 2021 self-released their debut EP ‘Human Beasts’ as a digital only release. Vephar play a fast style of deeply groove laden Death Metal consisting of intensive riffs, mixed with some gnarly sounding guitar solos and a few chugging moments for the headbangers out there to sink their teeth into. The drums are a  programmed affair which I’m not usually as keen on, however in truth they do a steady and brutal job here in keeping the EP moving at a blistering pace. I like the vocals of Vephar front-woman Amira Gaafar whose fierce, guttural grunting style adds a layer of putrid, gore soaked pestilence to the release. This ‘Human Beasts’ EP is best summed up as an unrelenting dose of feral, dominant aural punishment. It never slows, it never ceases! As I’ve said in many a Death Metal review, you never truly know how sinister and crushing a band can sound until they drop their pace down to a crawl. Vephar close out this debut offering of blasphemous, blood soaked Death Metal with ‘Sound of Chaos’, a creeping, darkly vibrant track of catacomb dwelling putridity, with some bowel clenchingly satisfying deep, dark guitar grooves, and a few technical flourishes thrown in for good measure. Great opening EP from Vephar… I’m off to listen to their album!