Swan Messiah – Call of the Burning One 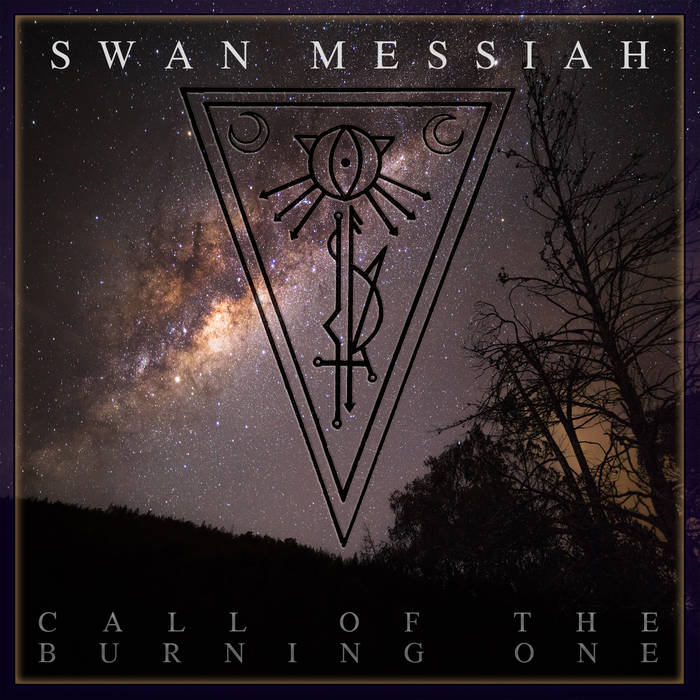 Swan Messiah is from Melbourne, Australia and is the sole work of Matthew Leith McKenzie for all of the instruments and vocals across all the releases. On Metal Archives, the band is listed as Drone/Doom Metal, though for “Call of the Burning One” a thoroughly Black Metal approach was used. Elements of Drone, Doom, and even touches of Death Metal are used to accent the album, but for the most part, this was Swan Messiah’s dabble into the world of Black Metal. The songs are all on the long side, with the shortest being over seven minutes and the longest clocking in at nineteen. The songs are primarily a mix of Ambient/Atmospheric parts and mid-paced Black Metal.

The vocals are mostly in the Black Metal camp, with some surprising and very effective clean vocals mixed in. It is worth noting that in most Metal, I really don’t tend to like clean vocals, usually too much of the edge the music had otherwise is instantly destroyed, and that isn’t the case here at all; the clean vocals fit the music well, instead of forcing the music to change to suit the vocals. The harsh end of the vocal spectrum is a fairly discernible Black Metal growl that is consistent in a storyteller-like pace and tone. The guitars, bass, and drums all fit in with the construct of the music flawlessly; from what I understand, this is Swan Messiah’s first outing in the Black Metal field, making this feat all the more impressive. The solos are executed within the same tone as the rhythm guitars, instead of breaking it to provide a cleaner platform, with the notes still bringing the melody and intricate displays; it raises the whole of the song as a result.

As I mentioned these songs are long, a decent chunk of the time is the in Ambient/Atmospheric intros, outros, and interludes, but most of the run time is engrossing Black Metal with tendencies of Epic/Folk, Doom, Drone, Death, and even touches of Industrial Metal. The majority of the music is mid-paced though it does slow down and speed up with ease and a precise, almost tactical, deployment. Matthew is remarkably deft at juggling the differing influences and distilling them down into a Black Metal album that both shows you every inner working, yet also hypnotizes you into only seeing the whole. This music is at times horrifying, elegant, evil, regal, mesmerizing, and caustic; Swan Messiah manages also to, impossibly, pull all of these off at the same time.

There are only five songs on this monster of an album that clocks in around 68 minutes and one of them stands out far beyond the rest for me, “The Shrouded Urn”. I completely relished the ebb and flow from one segment into another, and the Droning Ambient part that becomes Industrial was the most enjoyable of that style on the entire album. This is a truly impressive release, as every song has its own character and brilliance. Even though each song, and the total runtime, is long, “Call of the Burning One” has a high replay value due to the sheer musicality on display. This is one of those rare albums that should find a fan among almost any metal head, as every sub-genre itch gets at least a little scratch. At this point, I have no idea what to expect next from Swan Messiah, but given how blown away I was by these five songs, I can’t wait to hear more. (Ethan)