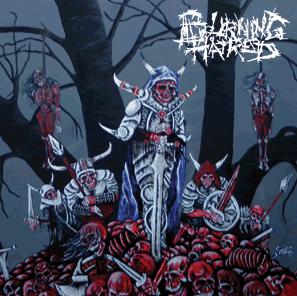 Here we have a Dutch band with their three-song demo record titled “Apocalypse of the Dead”. This is the second demo in their career after the “Burning Hatred” demo from 2005. An interesting fact in Burning Hatred ‘s line up is the name of Arnold Oudemiddendorp (I will have problems pronouncing his last name for sure) who has been part of the Dutch Death Metal pride Altar (in recent news Arnold isn’t anymore part of the band and Burning Hatred are looking for a replacement). So having that in mind what does this band has to offer then?

Burning Hatred strike with three pieces of oldschool Death Metal in the vein of old classics like Grave, Dismember or the earlier works of Entombed. “Silenced” starts off with an admirable mix of melody and aggression, “Hate Feelings” follows sounding like a classic Grave song (“You’ll Never See”- era) and the fatal end comes with “Sheep Among Wolves” which is a considerable closing track.

These guys aren’t newbies in the scene and know pretty well what are they doing and how to make heavy yet groovy and memorable music, something not so common in the extreme music of today. The good potential of Burning Hatred is obvious in this demo recording and hopefully the band will find soon a proper label to work with! (Zvetan)