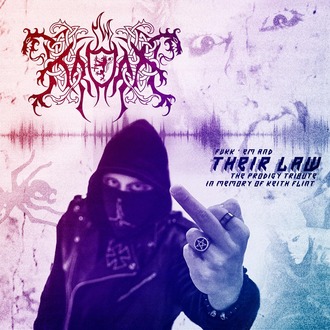 Ukraine may not be known as a hotbed for Black Metal in terms of quantity of bands, but the bands that are coming from there are some of the best in the Black Metal scene, for example, Hate Forest, Drudkh and Nokturnal Mortum as well as Kroda, who we’ll focus on here. Kroda started out the gates with no demo(s) going straight to a full album. Since then, they’ve released 8 studio albums, some splits, 6 live albums, a DVD and now this single. Like most Pagan bands, they get lumped in with NS bands, as do most Pagan bands (and a good portion of Black Metal in general these days, including my band) which is utter horse shit.

Well…this single we have here now is a tribute to electronic band, Prodigy, more specifically Keith Flint, singer of said band who passed away in March this year. Honestly, i know very little about Prodigy or electronic music in general except for a few bands like Throbbing Gristle and a few Wax Trax bands. What i do know is I have followed Kroda for many years and i gotta say, I’m quite impressed with this track. It still has that Kroda sound/feel to it. This is available as a digital download and I would say if you are a fan of either band, or both, and love high quality Pagan Black Metal, I’d say it’s high time to check this fucker out asap. (LOD666)