Funeral Winds – Raised By The Fury Of The Ancient Ones [Compilation] 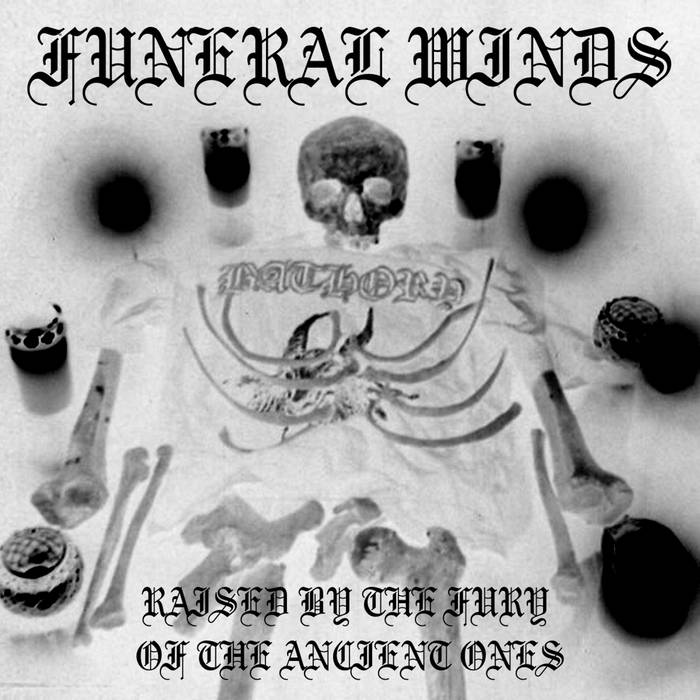 By the end of last year the Dutch Black Metal entity Funeral Winds independently released this compilation of “raw sounding Funeral Winds recorings”, which were recorded over the years between 2001 and 2004. So, that means that they are post ‘Godslayer Xul’ and pre-‘Koude Haat’, it might therefore not surprise that the majority of these tracks were taken from or ended up on these albums.

The first four tracks are indeed rawer sounding versions of songs that would later end up on the band’s ‘Koude Haat’ album from 2004 (originally released by Death To Mankind). In their even more stripped down form they bear strong resemblances to old Norwegian Black Metal, that fast tremolo riffing just breathes early Darkthrone and the overall ambience is akin to pre-‘Hammerheart’ Bathory. Though I was aware of the existence of these recordings, as they were known as ‘Promo 2002’, but I never heard them before. Having heard these tracks a couple of times now, I do think they might even sound better then the ones that finally ended up on the actual album. In the end I think these rawer and unvarnished songs have an even more violent and aggressive character that really suit them.

The fifth track is taken from the ‘Black Metal Against The World’ split 7” EP, which Funeral Winds shared with Ad Hominem, Eternity and Leviathan. Compared to the first four tracks, this song sounds a bit more chaotic, mainly due to a more blubbery guitar sound, giving it an almost Death Metal edge, and the high-speed riffing/drums. Again this tracks is mainly based on Norwegian branded Black Metal, quite similar to Gorgoroth’s ‘Destroyer, Or About How To Philosophize With The Hammer’.

Next up are the two tracks that were released as ‘Promo 2001’ and holds two tracks that were originally released on the band’s 1998 ‘Godslayer Xul’ debut album. The recordings are a bit more dense in sound, which gives the tracks quite a different ambience compared to the originals. Especially the drums are sounding really good on these raw recordings, those crashes (cymbals) are really giving the songs that extra punch.

Last, we get Funeral Winds’ take on ‘Massacre’, the great opening track of Bathory’s ‘Under The Sign Of The Black Mark’, which was supposed to be released on one of the many Bathory tribute albums, but never actually materialised. Funeral Winds’ version is quite a bit faster, while the original is already one of Bathory’s faster tracks. And while the original already has a certain chaotic vibe going to it, with that halfway placed great whammy solo, Funeral Winds’ version is at least equally chaotic, mainly due to the somewhat messy recording. This is a worthy tribute to Quorthon.

Though you don’t get any new tracks, the versions presented on ‘Raised By The Fury Of The Ancient Ones’ might have gone unheard for the most part. And besides that, those rawer and rougher character of the tracks presents Funeral Winds in (even) more stripped down and aggressive conditions, and frankly, that’s something that the band is seemingly able to wear well. Having heard all of these tracks again and having taken this trip down to the band’s history it is with eager that I am looking forward to Funeral Winds’ new album, which will mark their debut for Osmose Productions.