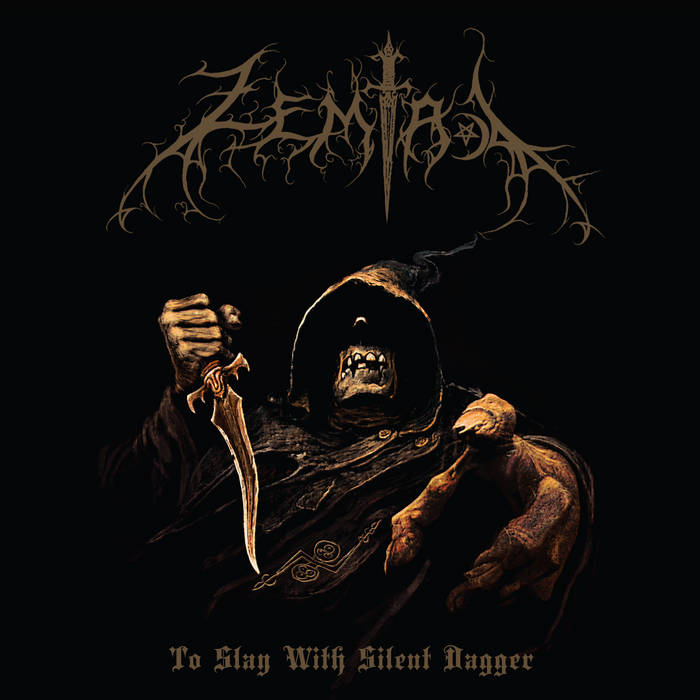 Archon Vorskaath has led his brainchild Zemial through many years of musical transitions and past many great releases. On many occasions, the enigmatic act has managed to surprise fans and critics alike. Looking back on the three decades of existence and the band’s rather impressive quality output, it is fair to conclude that Zemial earned its cult status. The band never reached the wider success of some of its contemporaries, but in limited circles, the band definitely enjoys huge appreciation. But these loyal followers weren’t treated to much new music the last couple of years. Apart from a digital single-track EP from 2016, we got nothing after the band’s ‘Nykta’-album from 2013, which was the follow-up to an album that was released in 2006. Zemial clearly doesn’t need the big output, instead Archon Vorskaath prefers to deliver quality.

This new EP, ‘To Slay With Silent Dagger’, counts four tracks and is meant as an appetizer for the new full-length album bearing the same name. According to the band the second and fourth song are supposed to also be featured on that future album, that leaves the short first tracks, which serves as some kind of intro, and the third. But they all do sound to have been forged in one take, as they all breathe the same vibe of primal metal. Just like the band presented on ‘Nykta’, there is a very strong Hellhammer/early Celtic Frost connection on these tracks, giving it a very authentic vibe. Yet, needless to say, Archon Vorskaath is a way better musician than any of the young boys of Hellhammer. This leads to a far tighter musical offering, but it still has that great early Celtic Frost vibe that only few can pull off.

The musical talent of Archon Vorskaath is no secret and commonly respected, with his musical visions and creativity he also contributed to the new incarnation of Proscriptor MacGovern’s Apsû. That self-titled album that got its release last year also clearly wears his signature, and vice versa. ‘To Slay With Silent Dagger’ also has some of those sharp Absu-styled Thrashy riffs, making this EP a tasteful experience that blends a lot of Black Metal’s primal character with a more contemporary sound.

As far as I’m aware, there is no release date for Zemial’s upcoming, fourth album. But if this EP really holds the musical spirit of what is to come, we can brace ourselves for a crafty Blackened Thrash album, that has a strong Heavy Metal base as well.