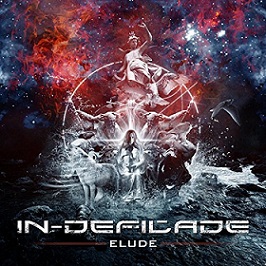 Some might have already heard In-Defilade as they released their debut in 2015. And now they have unleashed their new creation “Elude“. For those who haven’t, this band was formed by ex-Nile member Jon Vesano (the albums “In Their Darkened Shrines” and “Annihilation For The Wicked”) and was joined by ex-Narcotic Wasteland drummer Erik Schultek, Subverseraph (Vesperian Sorrow) and Shawn Lee Bozarth (Defiance). Guest appearance by the almighty Dallas Toler-Wade (also ex-Nile) and Naska make this album even greater. About the music now…imagine a modern industrialised version of Nile and you pretty much have it. Brutal face melting death metal with pseudo Arabic scales, relentless drumming, great atmosphere with a colder edge due to some industrial elements and  the member know their duties. This an album I can recommend to modern death metal fanatics. (DPF)