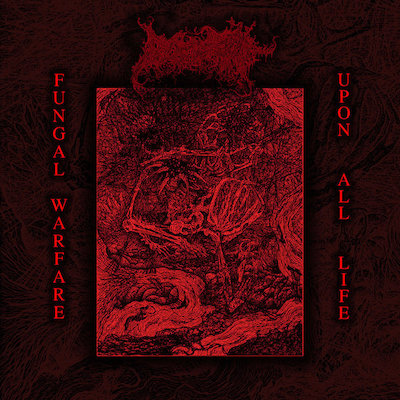 If you get on edge contemplating the idea of a sentient, caustic, saprophytic warlord hellbent on the destruction and consumption of you and every other living being around, buckle in because it’s time to get weird.  There is no shortage of Mycological savagery contained within Blood Spore’s “Fungal Warfare Upon All Life”. These Phytopathological Philadelphians have unleashed their first putrid offering to all future fungal nutritive sources. From the crushing mid-paced riffing, sludgy dirges and interesting guitar lines with unexpected twists and turns, Blood Spore have created something special.

The tracks weave and intertwine like voracious mycelium absorbing nutrients through their thread-like hyphae.  Except, the rich environment from which Blood Spore obtains sustenance is filled with filth and death.  On the carcasses of Death-doom progenitors dISEMBOWELMENT and even Winter and Rippikoulu they have fed.  Consuming, decomposing and absorbing the biomatter of current legends such as Blood Incantation, Spectral Voice, Krypts and Phrenelith have made them powerful.

While there are certainly a plethora of club-wielding, rock-smashing riffs, “Fungal Warfare Upon All Life” is certainly not a brainless offering.  Song structure, not to mention the EP as a whole, is well thought out and measured.  The pacing is excellent, with unexpected but perfectly timed tempo changes. Vocals are vicious and subterranean, with a blood gurgling high pitched distortion and slight reverb that would be equally at home in Raw Black Metal.  The bass tone is very beefy and complimentary to the guitars throughout. The guitars have a clarity and bite that makes it very easy to pick out distinct riffs and lead lines.  And, the drums are spot-on, rollicking through varied tempos with aplomb.

Many times when bands create atmosphere on a recording, the entire mix sounds as if the microphones were simply left at the mouth of a cave with the band standing 200 yards away, 3 turns down a long corridor standing in an underground lake.  While I personally love ultra-cavernous and abyssal recordings, it is not a great way to hear what is happening with the instruments.  Blood Spore have managed to somehow exhibit clarity in the filth. Blood Spore are spreading their reach and elevating themselves on a forest floor littered with an endless list of skilled contemporaries currently permeating the underground with aural attacks in a second Golden Age of Death Metal. “Fungal Warfare Upon All Life” is the manifestation of incipient musicians with powerful sinew and bone, but rotten hearts and souls. Miss this at your peril.

I recall as a child I would go into the woods, grab a large stick and pretend to be He-Man or some Barbarian Warlord.  Just smashing large mushrooms off of dead trees, stumps and the ground………  I was always victorious of course.  Well, I always thought I was.  Until now.  Now I see I never could have won.  The Saprophytes have always been… and always will be….. An endless destructive mass violating the earth wherever life dwells………….and will decompose all in the end. (Chris Topher MC)