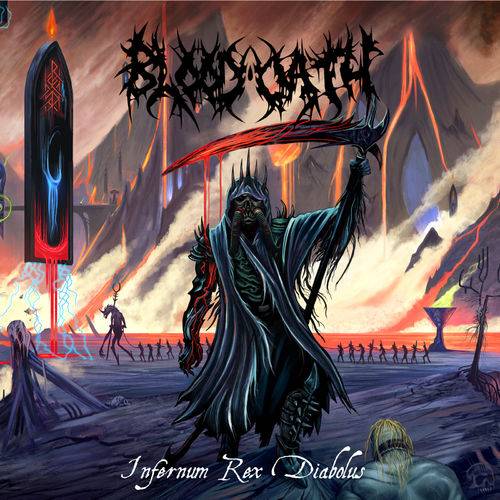 Sometimes it can take a couple of listens to really get into albums but for me this one went on high rotation straight after the first listen. Actually, that’s a lie, Blood Oath had me halfway through the first track and the rest of the album didn’t let me down. “Infernum Rex Diabolus” their 2nd full length release, brings you, the happy listener, 9 tracks of unashamedly no-nonsense and straightforward Death Metal with smatterings of some old school Thrash elements thrown in for good measure and we all know how much LongStretch likes this combination.

Blood Oath released their debut album in 2017 and although that’s been a while, it would appear that they have been on a quest of skill honing that has now culminated in providing an album that brings fury, spleen splitting virulence and vicious and ruthless grooves. All this is combined with excellent production which not only allowed for understandable lyrics not usually associated with Death Metal but also let the songs breath and come to life.

Now to some of the tracks that I reckon will not only more than please their current crop of fans but will also deliver them with a whole new batch of avid followers.

“Angels to Some Demon to Others” sets the scene of the whole album wonderfully. Beginning with a slow easy on the ear guitar melody that then flourishes and melds into pummelling thrash infused guitar work, high energy drum and percussion work. This track also has one of the best singalong choruses to ever leap out of speakers. Believe me when I say it will be an earworm and at some point, you will find yourself singing “Your suffering will be legendary”.

“Infernum Diabolus” is slower in tempo than most of the other tracks but what it lacks in pace it more than makes up for with brain melting and gnarly double kick & blast beats and furiously anger driven vocals. Then, confirming that the hiatus between this album and the first allowed the band to build on their excellent musicianship and lyric writing “Monuments to our Ruin” combines all this with neck snapping tempos. Oh, did I mention what a crushingly savage riff this track has, no? well take out the crayons and colour me pink cause holy shit it’s a pearler.

I grinned my arse off through this whole album listening to these wonderful compositions that brought me so much joy. Thankyou from the bottom of my heart Blood Oath. Fuckin loved it. (Longstretch)