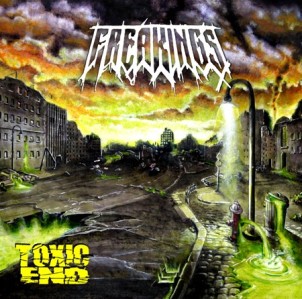 From beginning till end they rage on this album, not one moment is audible where you could say: well, they took time for a smoke right now. In comparison with their previous release (“Gladiator”) there’s  less crossover influence to discover, but the strategy is the same. Songs that don’t last longer than 5 minutes, but all executed supersonic with mach 9.6! The used riffs are the most important facet on this album and I’m confident it’s created to headbang! The uncontrolled rhythms, neck breaking riffs (example tracks: Violent Disaster, Friendly Fire and Wave of Pain), unpolished production and the splendid use of backing vocals are sublime on this release, but there’s also something they will be judged at…the lack of surprise or originality makes this album not one that keeps attracting after several listening. Hereby I mean that after listening to this album more than once in a short period, it loses its fascination and wow-feeling like the first listening.

I would recommend this one for fans of Annihilator, Gama Bomb and Tankard, but also any other thrash fan will enjoy this one. To discover this band, just start with opening track ‘Hell on Earth’ and after a while you’ll sing along with ‘Thrash will Never Die’ to ride out the entire album till you have ‘No More Excuses’. (Fredde)