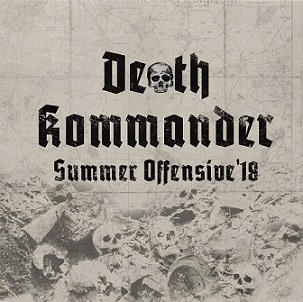 Gotta say a big thank you right from the start to a certain lady named Jelena Ivanovic for putting me onto this band, she is probably the biggest fan of a certain band that I am about to mention, alongside me, and what is this band you may ask? Well, it’s fucking Bolt Thrower old chap! England’s finest war machine. A band I love so much that I have the symbol of chaos as depicted on the IVth Crusade album tattooed on my upper left arm, that’s how fucking much I love them ha-ha. Never has a band had the ability to make me just drop down in total awe and worship at their very mention, and if I had two dogs, I would name one Bolt, and the other,Thrower. Luckily I have no dogs..

Another thing that needs to be mentioned is that The Great Mackintosh is indeed, half Scottish. Why is this important? Shouldn’t I hate the mighty Bolt Thrower for being a bunch of bloody Poms? Well yes, maybe, but the music of global war and utter devastation knows no race, culture, or creed, it just fucking flattens them all under its blood encrusted tank tracks and shells the living shit out of any other stupid notions one may be harbouring. So back to Scottish bit. This band, being Death Kommander hail from none other than Scotland, and that’s why I had to mention it. Being a Metal head makes me very proud, and the fact that there are many great Scottish bands out there has not escaped my attention, but when you have a band that is for all intents and purposes pure Bolt Thrower worship, and they are a bunch of kilt wearing bastards, my excitement levels go through the proverbial roof!

Yes, Death Kommander are a bunch of mad Scottish tank driving, bunker destroying, town razing, blood thirsty Kunts, and this is exactly why you must have this EP. No surprises here at all. In lyrical content, and musical delivery, these haggis loving, tartan wearing legends of the highest order are here plain and simply to continue a legacy of greatness, and they fucking well do that with flying colours! There is not much point in me going through each track, “Pay With Your Blood”, “Operation Eisenfaust”, “Onwards” and the last, “Shellshock” are just exactly what I have described, and you bloody well need to fucking buy this fucker RIGHT FUCKING NOW, or I will send a tank or three in your general direction and they will wreak havoc in your garden bed and destroy your toilet, and also possibly run over your cat. I will also ensure that they are playing the bagpipes as loud as is humanly possible so that your neighbours will hear the commotion and laugh at your demise, and also tell them not to let you use their toilet under any circumstances. Yep, cop that ya piece of shite.

Absolutely essential. If I had to pick a favourite, it would be the “Onwards”. Here they are at their finest, and you can almost smell the dirt and mud of the trenches, and taste the coppery taint of blood on your lips as they pound all around you into a messy quivering mass of flesh, broken bones and spent cartridges. Oh all for the greater glory of war I say. ‘Victory or Die’ has never sounded more poignant. If I had one complaint, it would be the lack of said bagpipes, for surely that would lift this whole shebang into another level entirely! All hail the mighty Scottish war machine! All hail Death Kommander! FUCK YES! (The Great Mackintosh)