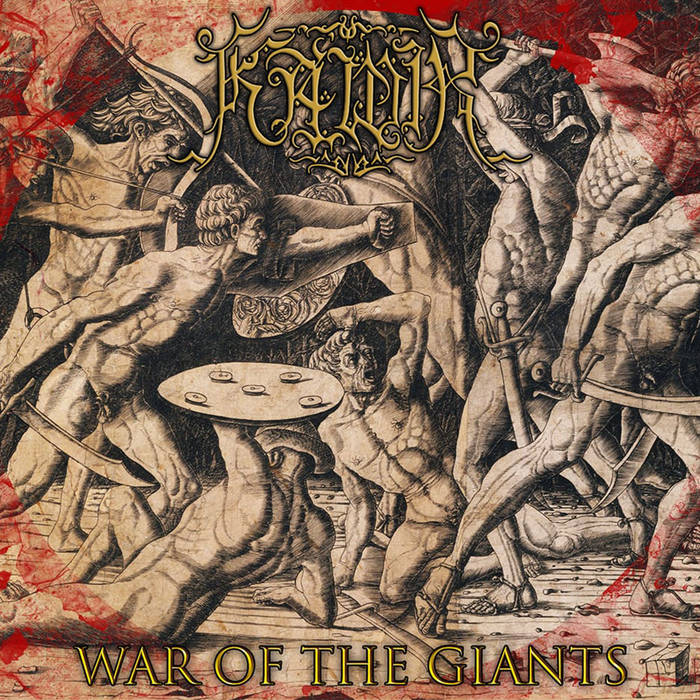 This (so far) digital-only EP was released with a special purpose. Before we dive into the musical content of the EP, it might be good to also pay attention to the idea behind it. On the Bandcamp-page of these Greek Black Metallers Kawir, they themselves write the following about it:

“During the pandemic, Greece had one of the harshest lockdowns in Europe. In the midst of the lockdown, Kawir founder and lead guitarist Therthonax fell ill and had to undergo multiple heart surgeries. The operation was successful and he is now in recovery, but he still faces difficulties, as it is impossible for him to perform concerts or work normally or even walk normally.

For this reason and with a sincere desire to offer a little help in our way, and above all with absolute respect to Therthonax, we are releasing via Bandcamp a special EP with 3 songs called “War of the Giants”. It contains 3 tracks from our upcoming full-length album and all proceeds will be donated to Therthonax in order to help him get back on his feet. Literally and figuratively. Thank you.”

The intention of the release of this 3-track EP is clear and its urgency underscored. But it’s not just this sad affair that makes the EP stand out, if we look at these three tracks as an appetizer for a new album then it looks like this is going to be another grandiose effort.

Kawir has always been a band that has operated a bit in the lee of the big Greek Black Metal bands, but musically that is by no means justified. The band has been delivering great Greek-style Black Metal since the early 90’s and their three decades of experience can once again be heard on these new songs. The Greek sound, that is best described as short chugging, Heavy Metal-esque guitar riffs, Mediterranean-style melodies, often somewhat barking vocals and fairly simple drums with plenty of room for dynamics, is what Kawir excels at, but they have further enhanced their music with beautiful Southern folk (melodies). These songs are in line with what the band has shown on their last few albums, Εξιλασμός (2017, Iron Bonehead Productions) and Αδράστεια (2019, Iron Bonehead Productions). Kawir continues to show that they are far from finished, with the ever maturing of their sound they prove without a doubt to be one of the better Greek bands, operating in the lee or not.

Judging by the statement with this EP, it remains to be seen when we can expect a new album, but with these three songs in mind, it is something to look forward to. As well as a speedy recovery for Therthonax.