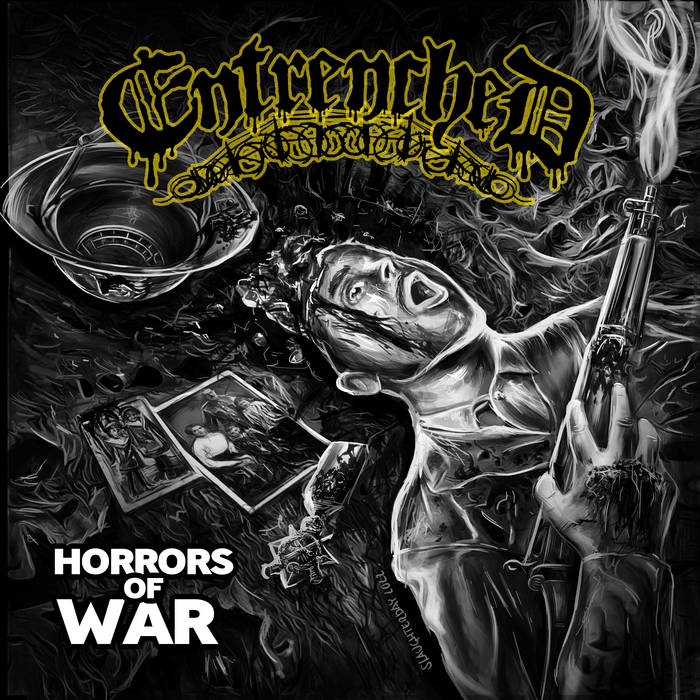 At the end of last year, our VM-Underground chief-editor Ricardo was very enthusiastic about the first demo of this Polish one-man Death Metal act. I know he loves that specific Boss HM-2 sound, so it’s no surprise that he gave ‘Demo MMXXI’ a positive review and also put Michal through his paces in an interview. That interview revealed that he needed another month or two before releasing a new demo.

Those two months did end up being a bit more, as it was only last summer that ‘Horrors Of War’ saw the light of day. When both demos are compared, there is actually not a whole lot of difference. On ‘Horrors Of War’, Entrenched sounds a bit brighter and that famous Boss HM-2 sound seems a bit less thick on top. Michal has also invested a bit more in melody, making for (even) more direct comparisons to Dismember. But ‘Horrors Of War’, which by the way is available both digitally and on CD, does sound much ‘lighter’ than a band like Dismember. That’s also my feedback on these six songs, it seems to lack a bit of punch and aggression, so it doesn’t really linger. This is mainly due to the somewhat naive and standard drums and Michal’s vocals are not the best either. He also talks about this in the interview, perhaps it is not a crazy idea to find a good singer for Entrenched. I might not completely share Ricardo’s enthusiasm, I do hear where his hooraying comes from. The dedication and passion for Old School Death Metal is audible and that is something I do wholeheartedly share.

Despite the fact that Entrenched might not deliver the best new Swedish Death Metal, it’s still a fine ride. Fans of bands like Dismember, Entombed, Bolt Thrower and, for instance, Fleshcrawl can definitely give this a try.