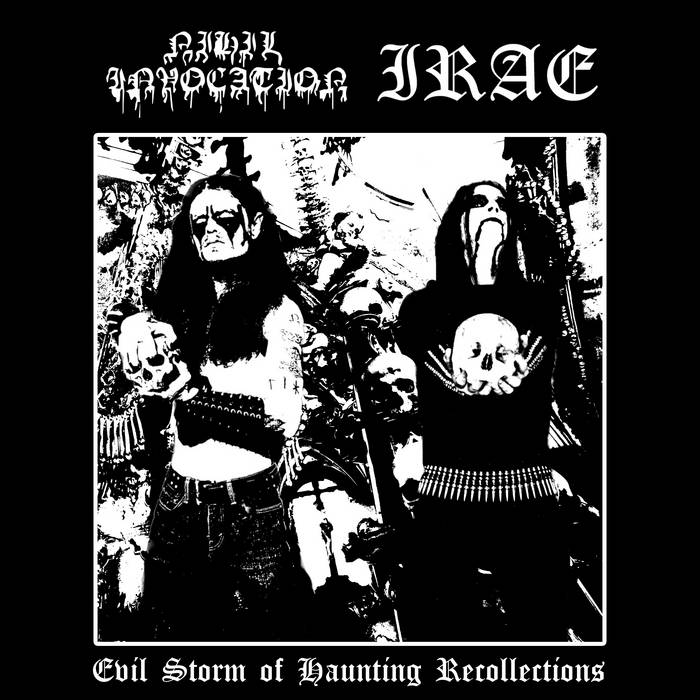 ‘Evil Storm Of Haunting Recollections’ is a collaboration of two individuals who have drilled down the Black Metal genre to its very primal essentials. Both Nihil Invocation and Irae have a rather extensive back catalogue and shared many tapes and vinyl releases with other acts, this one seems to be quite a fitting one as they both seem to pursue a similar sound. This self-released split release was made available digitally in October of 2022, but Nuclear War Now! Productions has its vinyl release scheduled for this year.

First up is the USA based Nihil Invocation, led by Deathwalker, who is also in the Nuclear War Now! Productions recording act Vengeance Sorcery. His signature musicianship can be discerned, for it has a similar bareboned nature. Stripped off any unnecessary frills, it is a downright slow and rocking piece of harshness, not all too far removed from the old French Les Legions Noires traditions. The three tracks are all around the three minute mark, making it is rather easy to digest and giving the songs an even more basic feel to it. A remarkably clean sort of production makes Nihil Invocation’s take on the Black Metal genre even sounding more minimalistic.

Irae from Portugal sounds a little rawer and starts off with a spacey sort of intro, after which it goes into a harsh and Lo-Fi kind of Black Metal. Just like its split partner, Irae sounds pretty much like those Les Legions Noires bands (Vlad Tepes, Mütiilation, Belkètre) but Vulturius blends in some vocals that, to me, bear similarities to German Black Metal from some two decades ago. Irae tends to be a little more diverse as well, not only in the use of variation in pace, but also due to the addition of some melodies and even a slight folky slant.

This split release not only has a fit perfect name, ‘Evil Storm Of Haunting Recollections’, as it indeed sounds like an evil storm of bygone spirits, but it also turns out to be a perfect collaboration of two like-minded acts. Even when there literally is a wide ocean between them, both acts are almost identical in musical approach, but still manage to sound different on a more detailed level. Anyone who enjoys their Black Metal in a very basic and primal fashion with a strong punkish, rocking vibe, can’t go wrong with this alliance made in hell.