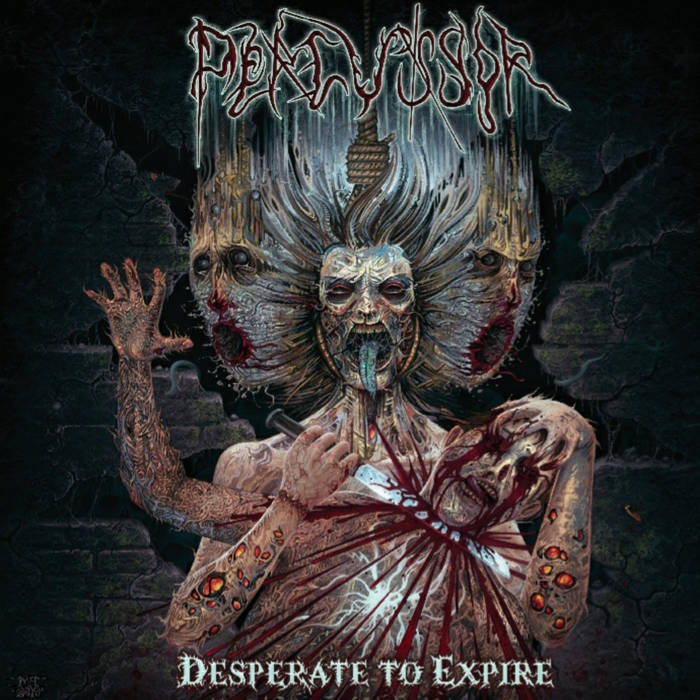 Named after an agent/person who strikes, Percussor is a traditional Death Metal trio based out of the city of “Brotherly Love”, serving reminiscent courses of ingestible OSDM compositions. This project has been banded/reformed since the 90s & within the past seven years have put out four LPs & their third most recent independently EP “Desperate To Expire”.

Compared to previous releases, their material and sound has a conventional approach that this time around the recording is more polished, less jarring/rough around the edges, and plays up on vocals being more flattering when fast tempo tracks come into play. You hear many prominent classic influences akin to early Morbid Angel, Incantation, Obituary, & Bolt Thrower in the riffs with harrowing vocals delivered in a harsh clamoring pitch. Bass always delivers that necessary groove and this EP is no exception, notable on swift album title track “Desperate To Expire”, before blasting commences.

Mark Cooper’s cover art comes off as multiple cheesy B rated movie covers into one, with a figure bursting out of a wall but has multiple entities/spirits attached to it while also holding a nearly severed head.

Within six tracks, nearly thirteen minutes duration & closes off with an instrumental “Execrate”, you get genuine old school nostalgia of mid 90s death metal. There’s no ingenuity, crossbreeding genres, or gimmicks, just fun material written and recorded by three dudes wanting to put out material during a dark contemporary time in society.

Opens with “Whore Abortion”, sets the tone for drumwork which is constantly fast pace through out, abrupt endings, & intense. Longest tune featured is “Disturbing Reality”, redundant with tempo & blasting, but more lyrical context & riffs to be represented. “Rejoicing Your Death” gives little more highlight on bass & “Defiled Reputation” comes off as a continuation of “Rejoicing Your Death”, with extreme percussion detonation. Folks that dig what resonates from early era of Death Metal will appreciate this. (Tori Belle)