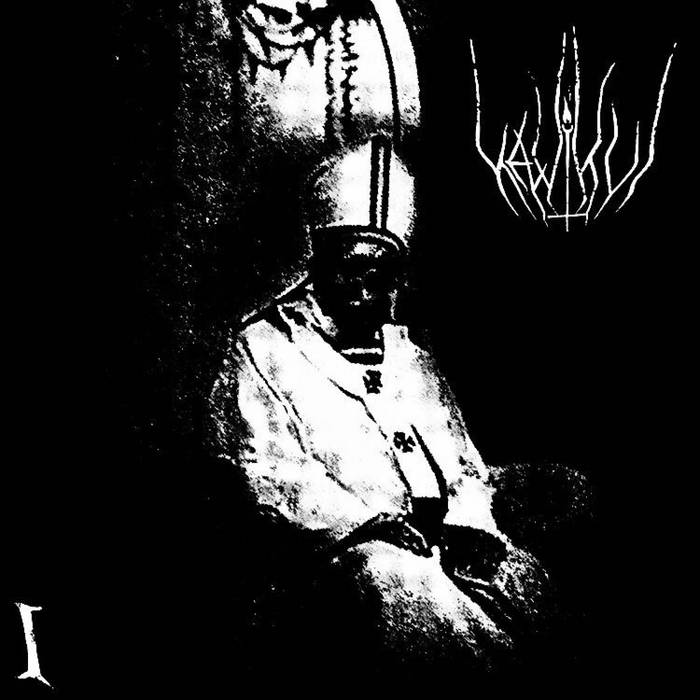 Although the inception of Kelvikus dates back to 2018 when founding member Naergoat started his new one man band, it wasn’t until much more recently that Kelvikus progressed into a full, four piece band. So whilst Naergoat hands guitar and vocal duties, he has now been joined by Liam Smith on guitar, (and backing vocals) bassist Elizabeth McKay and finally behind the kit, James Barry. Now a full band, Kelvikus waited until Christmas day of this year to unleash their opening salvo; a debut demo entitled simply ‘I’, which thus far is a digital only release.

A three track affair that starts with the cautious dark tones of ‘I, Oblivion’, a pulsating and violently urgent opening track that showcases maniacal guitar rhythms and bleak riffs, as well as a thunderous drumming style. the real power behind this deeply atmospheric demo is the slow passages of grinding, intensive sound, like a menhir strapped to the back of some pour soul being dragged relentless through some gloomy inhospitable wilderness. As those moments draw out painfully they finally crescendo into a volcanic eruption of long supressed aggression and savagery as a gruelling concoction of furious guitar tones, anguished despairing wailing and oppressive, primal drumming unleash a noxious, blackened fog upon the world, leaving just enough room for some mesmerizingly grim guitar solos to sound out slowly and rise into the stratosphere. If you take the time to read the lyrics you’ll soon realise that the overtly dark and disturbing atmosphere created by the music is matched by the suicidal thoughts being laid bare within, though in fact the track embraces and revels in the sweet oblivion of death.

‘I’ is also a well crafted demo with a great deal of symmetry to it. Two main tracks of colossal barbarity effectively sandwich ‘Apotheosis’, a shorter melodic interlude of slow, predatory tones. And so we come to ‘Serenity Through Scorn’, a further example of slow, brooding and dramatically written and performed Black Metal with emphasis on bombastic and grandiose drumming, as well as sledgehammer like riffs that cut jaggedly through the senses, before once more unleashing a cataclysmic beast upon us. In truth, calling this a demo is a misnomer, as the production and sound quality are superb, the band sound like they have been doing this for years and the whole release is professionally written and performed, as well as showing a great deal of creativity. I imagine there are some great things yet to come from Kelvikus.