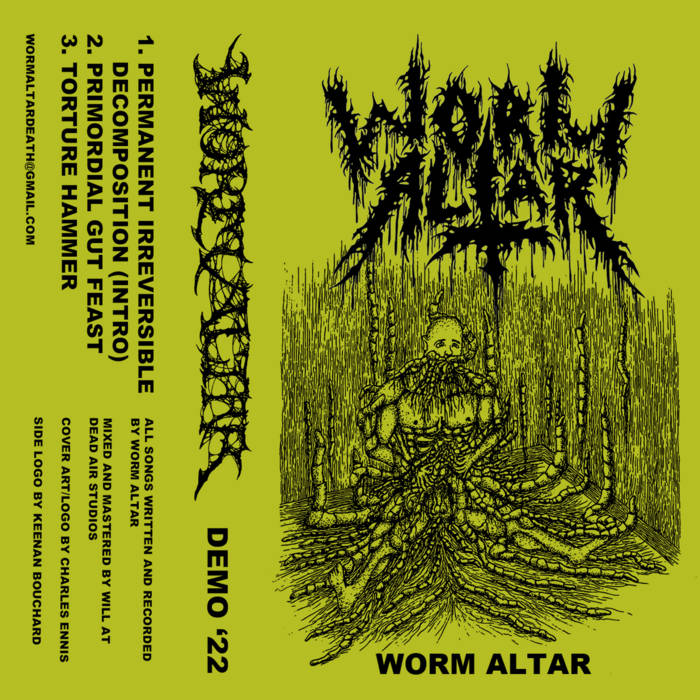 When I think of the state of Maine (USA), which I have never visited, my thoughts mainly consist of the imaginary and gloomy images I have acquired while reading all those Stephen King books; almost without exception all of which take place in that state. King himself is one of the state’s most famous inhabitants and often uses his own surroundings as inspiration for supernatural and evil suspense. The state’s rugged nature often plays a major role in this. Perhaps there is something in the air in Maine or it is the sinister nature of the locals, as this Worm Altar, also from Portland, Maine, seems to have the same inspiration. They just don’t turn this into exciting reading, but into rather barbaric and doom-laden Death Metal.

This self-titled demo is the first achievement of the band and consists of three songs that together make up for less than ten minutes of crude and gritty Death Metal. The super heavy guitars form the crunching base for the songs and are comparable with a band like Disma, but they are a bit less prominent in the mix. Worm Altar does not produce an impenetrable wall of sound, to be precise, but rather gives the sound a more stripped-down feel so it fits better with the music. The tempo is considerably low, but contains enough dynamics to prevent it from becoming too much of the same. That dynamic is mainly achieved by varying the drum speed and also the use of some sinister sounding melodies helps to make the music sound appealing. The melody certainly does not play a leading role, most of the music is riff-heavy and is food for fans of, for example, old Paradise Lost, Disma, Incantation, Anatomia and Funebrarum. The recipe may not be very original, but it certainly tastes great! (FelixS)