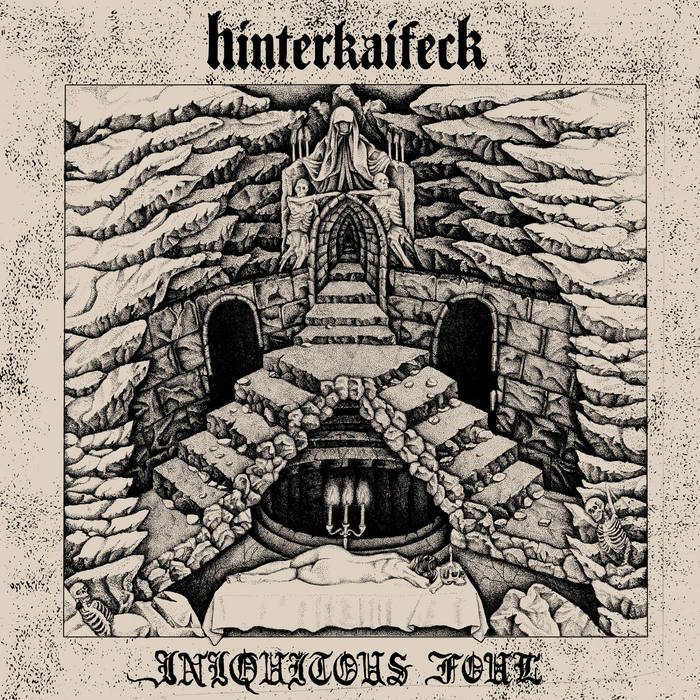 As it stands, ‘Iniquitous Foul’, the debut album from Australian Black Metal duo Hinterkaifeck is a self-released digital only release. However, at some point in the near future there is a physical release planned through GoatowaRex. I’m unsure as to which formats it will be available on but I can tell you that this album would sound brilliant blasting out of my record players speakers. Just saying GoatowaRex. I have to steal a line from Joshua Noel who left a comment on the Hinterkaifeck Bandcamp which simply states, “This record should come with a seatbelt”. Truer words never spoken!

A generic tag of Black Metal doesn’t truly give you an idea of the hurricane of sounds that the band produce for this debut album. Running a gauntlet of styles, from Black Metal, death Metal, Black/Thrash and even a little Speed Metal, ‘Iniquitous Foul’ is as varied in style as it is in extremity! I guess the cold brooding tones leading to an outright assault of vicious drums and riffs during introduction track ‘Feigling’ and leading swiftly into ‘Forebearance and Stench’ and then ‘Feign Yonder Flock’ should really have given me my first inkling as to what was about to engulf me. Indeed to begin with ‘Iniquitous Foul’ is rife with short sharp shocks of unrelenting hostility and violence. Not until ‘Circumspect Unto Meat’ does the pace slow a little, all be it briefly, though the deafening aural barrage is still relentless here. For me though this is the song where other elements come into play as suddenly out of the storm comes catchy Black/Thrash/Speed Metal hooks, as well as sleazier vocals.

It’s funny, I’ve listened to this album a few times now and I had loads to say about the various complexities to the album, but listening again now whilst I write this review and I realise that whilst there are other influences at play, the majority of this record is taken up by the sheer dominating fury and belligerent battering that is uncontrollable Black Metal savageness. Tracks such as ‘To Afflatus’ hint at more melodic guitar leads but the stay of execution from bestial barbarity is never long lasting. Joshua Noel of Bandcamp, I salute you, this should come with a seatbelt. An absolute bruiser of an album! (Luke Hayhurst)