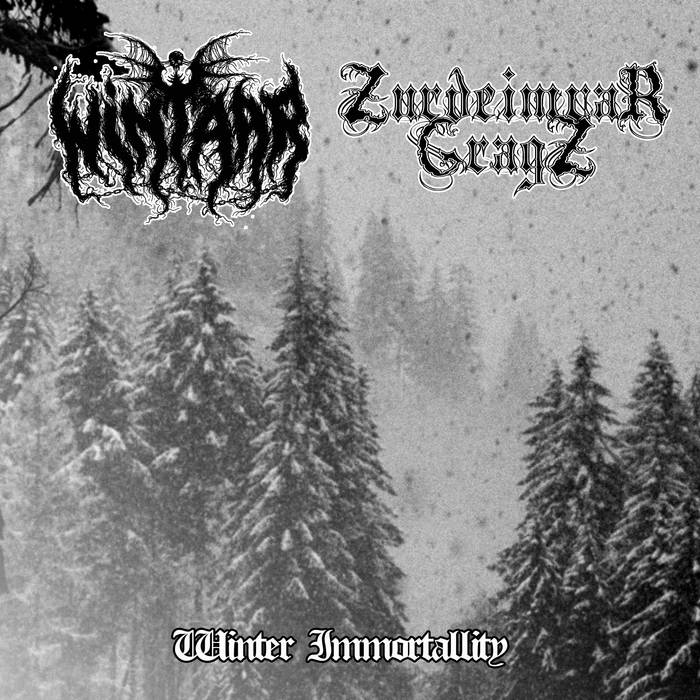 Wintaar and Zurdeimvar Gragz are two one-man Black Metal bands/projects from Russia, which are both very active on the digital platform of Bandcamp, although several of their releases have also been available on a physical format (cassette, Pro CD-R). Especially the Wintaar discography is impressive. An enormous amount of titles were released between 2017-2019.

This “Winter Immortality” split isn’t the first collaboration between both bands, but it is the most recent one.

Wintaar has the honour of opening this split release with 3 tracks. A surprisingly cathedral-like organ serves as a short intro for a burst of raw, untamed high speed Black Metal, with completely insane vocals, screaming in rage like a terminal syphilis patient. The total sound of these tracks is clear, raw / lo-fi and fairly untainted by digital gadgets, enhancers or loads of compression. The energy simply gushes out of the songs. Variation in pace, dead stops, changing rhythms, melodic yet unpolished guitar shredding are omnipresent throughout Wintaar’s part. Here and there it lacks a bit of cohesion in my opinion and the musician, named WV, tries to cramp way too many influences in a single song, non withstanding that the musical acrobatics of Wintaar are way above the average.

Zurdeimvar Gragz. This music is tighter, less experimental, leaning onto hypnotizing tremolo picking torture on the axe and a heavier drum sound. Dubbed, cascading, overlapping bestial roars from main man Damned ZedGi create an insane, mind wrecking dual vocal effect. Synths or keyboards are neatly mixed in the background, providing that extra dramatic atmosphere. They do surface more in the mix, to be used as an ambient outro. Zurdeimvar Gragz kinda reminds me of the early works of a Satanic Warmaster … on speed, PCP and vodka, that is. The vocals are as wacked as Satanic Warmaster, only more bestial and brutal. Zurdeimvar Gragz also borrows from both the first & second wave of Black Metal. Basic lyrics and an old school “fuck off” attitude seem to do the trick for comrade Damned ZedGi. It’s ‘Satan’ here and ‘Satan’ there. He even manages to rip Satanic Warmaster’s “Black Metal Kommando” (cover song) to shreds.

Question is: both bands are so over the top that their musical efforts are either some hilarious piss take on the Black Metal genre or a terrorist attempt to outclass all competition in the looney bin of satanic über Black Metal.

Nonetheless “Winter Immortallity” is a quite amusing, yet extremely nasty distraction, if you’re into extreme Black Metal extravaganza in the worst sense.

Feel free to check out both bands on Bandcamp or YouTube, if available. (LCF)