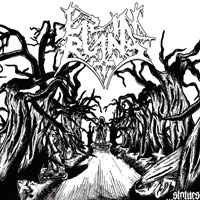 AAARRGHH! Old school death metal fans be aware! If you are looking for a band that keeps the flame of Scandinavian death metal burning read this review. If you are not too critical towards influences that are obvious, continue reading.

Lie In Ruins (only the name already is genius) is hailing from Finland and its history goes back to 1993. In 1993, the death metal hype was already going down so the guys of this band just played for fun. In 2002, the same guys came back together and started to do things more seriously. That resulted in the 2005 demo “…Monuments”. It received some good critics from the underground scene, but the best had yet to come. In 2006, they recorded their second demo “…Statues” and what an impressive this one is.

The six tracks are a true, honest and especially brutal homage to all death metal that was played before 1993. From the “Introductory Rite” to the classical sounding “Outro”, three bands are responsible for influence of the music from Lie In Ruins: Entombed, Bolt Thrower and Autopsy. For example, “Crawling Towards The End” contains the Bolt Thrower riff from the “Cenotaph” track and runs over to an Entombed sounding guitar intro of “End Of a Human Era”. And although the influences are so obvious and not to deny, Lie In Ruins manages to sound original and above all brutal. The sound is Scandinavian and has some sloppy touch especially the bass guitar, but it maker the music sounding natural, what can be heard on the opening track “Autopsycopath”.

I am enthusiastic about this demo, since this band has managed to catch the feeling, the sound and attitude that made Scandinavian death metal popular. And although the music might sound outdated to some, try to keep listening between the tunes and discover…… well, you figure it out. AAAARRRGGGGHHHHHHHHHH (Martin)