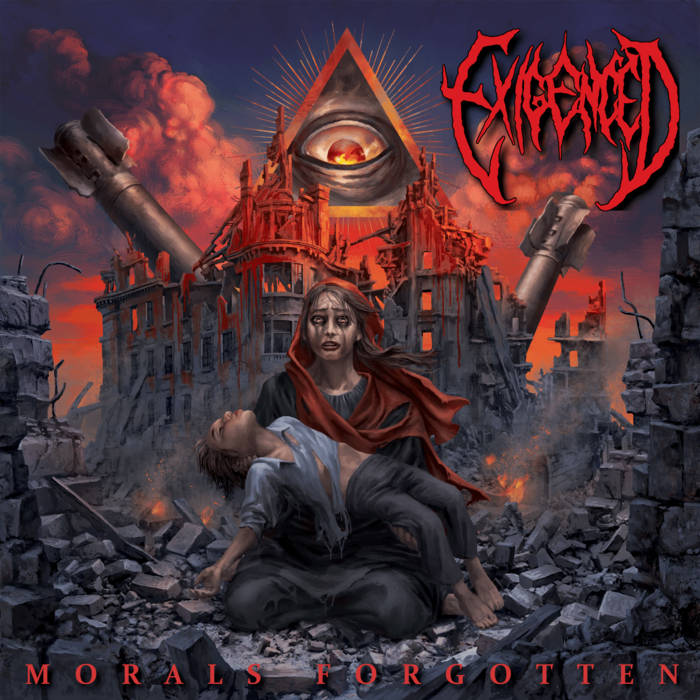 A debut EP of bruising, old school sounding Death/Thrash from Finland; ‘Morals Forgotten’ is an impressive first voyage from Espoo based quintet Exigenced. Opening track ‘Collateral Damage’ could easily have two meanings after reading the lyrics. A literal interpretation of being a soldier and taking in the carnage around you, or more of a societal satire about how we are the pawns being sacrificed in this hyper-charged political world. Exigenced offer up a nourishing broth of bass heavy marauding Death/Thrash, simple in construction but brutal in delivery. A rolling, volatile drumming style keeps this EP moving forward and is joined by raucous riffs and direct, aggressive vocals that spit out poignant and thought provoking lyrics throughout. ‘Morals Forgotten’ almost feels like a concept EP, mired in warfare and bloodshed and straining at the shackles of base human morality whilst endeavouring to carry out orders and kill and maim. Exigenced create their sound around this theme and there is a sense of turmoil and danger that clings to these five tracks, though the band are not averse to some savage sections of slaying riffs, boisterous drum tones and wild solos and guitar rhythms. A very powerful and aggressive debut offering from these lethal sounding Finns; hopefully they find a few more moral quandaries to rage against in the near future.