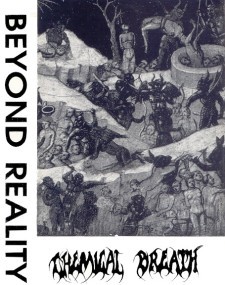 One year after Chemical Breath’s debut demo, the band released its second demo tape “Beyond Reality” in 1991. On this one front man and lead guitarist Alain Chernough took over the vocal department and Rene Rokx joined the band as a second guitarist. On “Beyond Reality” the blueprints for the band’s more technical style was set. “Mutilation” and “Erased From Existence” would also appear on Chemical Breath’s debut full album “Fatal Exposure”. I cannot remember the amount of copies this one sold, but I do recollect the impact was huge! “Beyond Reality” also contained one legendary song, named “The Convicted”.