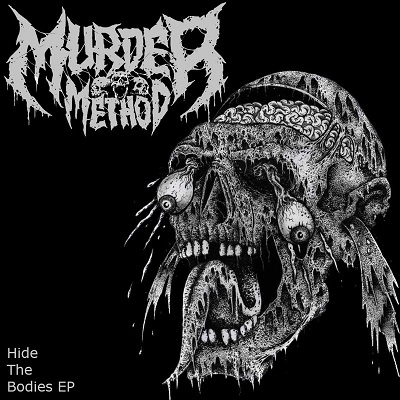 It was a cold and stormy night in York, Pennsylvania (USA). A night one should not stroll through the streets as the urge to see blood flowing is present. Still, a couple of individuals dare to defy the lurking threat…they are loading a van with musical instruments like a drumkit, a bass and a couple of guitars. It seems one of them is annoyed…annoyed by the fact he is holding a small case which contains a microphone for far too long now and he asks if everybody could hurry up. Just a couple of seconds later…thunder across the sky, lightning up the bands logo on the side of the van. A logo that is completely unreadable…but beneath the logo the band moniker is printed with a normal font…”Non-Offensive-nifty-commanders”…a self-described Pirate-Funeral-Grind-Melodic-Drone-Core orchestra. They have seen enough…from out of the shadows 5 other individuals appears with hatchets, hammers and machetes. With a blink of an eye blood is being sprayed everywhere, like there were 10 sprinklers colouring the pavement red. Silence….the massacre has ended…only one calm voice can be heard. “…Hide the Bodies”.

Let’s cut the Murder She Wrote meets Naked Gun / Police Squad nonsense and focus on the music. The 5 guys of Murder Method are here with their debut EP and some of you will recognize Randy Henry in the line-up, as he is also known for his musical activities in Visceral Disgorge. With Murder Method he is on the Brutal tour still, but differently as it has more Old School elements. You will hear some Vital Remains, Cannibal Corpse and Deicide influences during the “Hide the Bodies” EP which pace is mostly up-tempo. But thanks to the pace-changes and mid-tempo passages which results into a certain groove, the butchers of Murder Method keep on grabbing the attention of the listener. A well-done EP if you ask me. (Ricardo)