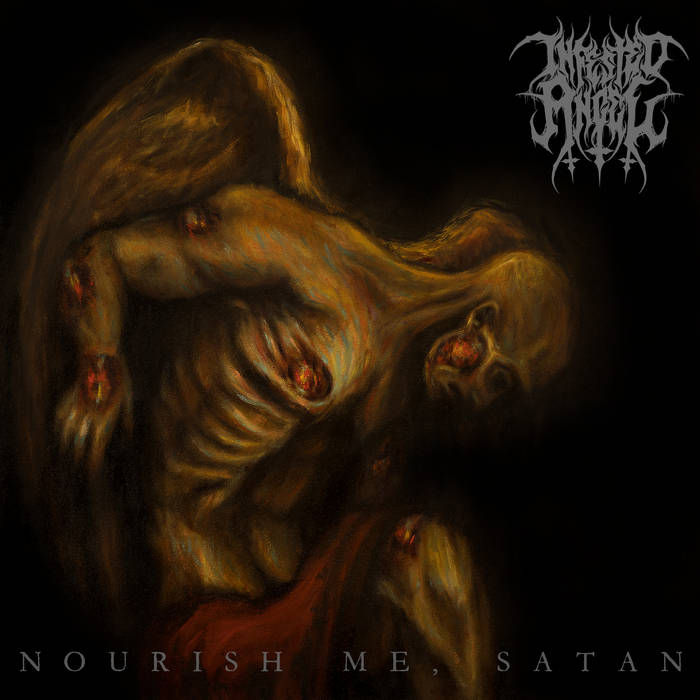 A debut EP from the UK’s second city, Birmingham cellar dwellers Infested Angel pour darkness onto the light with ‘Nourish Me, Satan’, a three track offering from a trio of miscreants who make a larger, grimier sound than any gathering of three people has any right to be making. On the menu is a sickening plate of old school Death Metal played crushingly heavy and mired in the true horrors of the world and what life can throw at you. No gore soaked horror movie loving cliched tropes on offer here. Why would they when the defective human mind and it’s by products of suicide and death are more horrific than any film.

At just over thirteen minutes in length, Infested Angel have limited time to impress. Yet what a release ‘Nourish Me Satan’ is. I love the name, it oozes malice and evil without being cliched or tacky. As for the three tracks that it comprises of, opener ‘Ruiner’ sets the tone sublimely. Mid to fast paced, colossal drum beats clash with growled vocals from deep down in the depths, and thunderous riffs surge forwards, high on adrenaline and blood lust. ‘Ruiner’ is a brutal opening track, punishing in its repetitive pummelling barbarity, and showcases some of the technical flair too, that the band would expand upon in a later release. The track of the EP though in my opinion is ‘Hell Closes (A Tragic Lane)’ in which the band unleash some great leads, more ravenous riffs and a full throttle blistering attack of venomous old school filth! A high energy yet filthy opening offering, mired in murk and devastating in its ferocity. You won’t have to wait long for more Infested Angel goodness. (Luke Hayhurst)