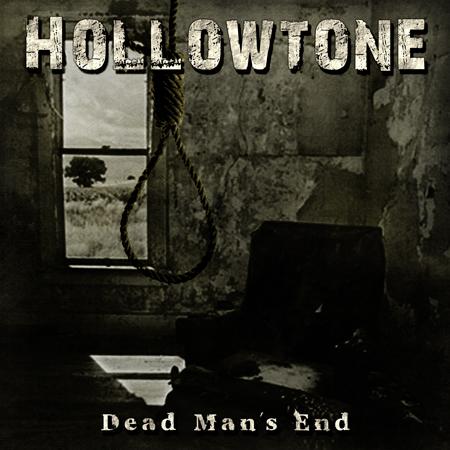 …about nostalgia and old memories. That’s what Hollowtone is about. Two guys from Belgium joined forces and made the band’s debut, entitled “Dead Man’s End”. Remember the days Dark Tranquillity released “Skydancer”? Or At The Gates defined Gothenburg death metal with their “Terminal Spirit Disease” album? Good old memories which all are almost faded away. Nowadays Swedish death metal has got practically nothing in common with the nostalgia I’m talking about. In fact, I’ve lost all interest in new commercial bands like In Flames and Soilwork. Thank God for Kristof Vandebeek and Bart Goffinghs, bringing back the legacy. The eleven tracks on “Dead Man’s End” are a godsend for those heralding the age of melodic death metal. Songs like “Demon In Your Dreams” and “The Silent Murder” (including solos) stick to your mind after hearing them only one time. Hollowtone’s main influence comes from Eucharist (they also cover “Wounded and Alone”), Excretion and At The Gates. I’m speaking about pure first rate addictiveness, not to be compared with crappy metalcore bands abusing the once so popular sound from Sweden.

Hollowtone is a studio project of Kristof Vandebeek (known from quite some other bands and projects), who’s doing all instruments and drum programming. I somehow regret the use of a drumcomputer – which doesn’t mean it sounds bad or mechanically overloaded. But the man behind Hollowtone clearly is a guitarist, not thinking as a drummer and therefore the drums on “Dead Man’s End” could use some more variation. The same remark can be made about the vocal lines. I fully sympathize with the use of grunts in stead of screams – and Bart Goffinghs did his best vocal performance ever – though more variation in vocal sound and structure would be welcome. Right now Hollowtone is preparing their next album “Misery Loves Company”. I’m sure the minor remarks will be brutally crushed by the next release. As I’m speaking “For The Bleakness I cry” runs through my stereo. I haven’t felt this great about Gothenburg death metal since a long, long time ago! You’ve made my day, guys! Never heard tones so hollow,… (FilipD)