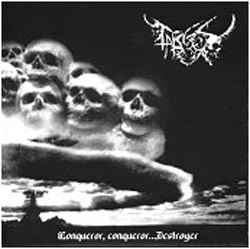 Immediately on the opening the tone is set; Otargos from France plays a true kind of grim black metal in the likes of old Immortal (just listen to the piece of ‘Battles in the North’ in closing track ‘Unholy Father’) and Mayhem. Otargos was found in 2001, yet from the playing on this demo (from 2002) you can clearly hear that these guys have been in this business longer, and indeed; after some research on their site – which is a hell of a job considering my French – I see that all members played in different bands before.

This French horde play their black metal really well, fans of the bands mentioned before, Dark Funeral and perhaps Carpathian Forest should definitely hear this one. Occasionally vocalist Dagoth throws in some death metal grunts, which gives the vocal lines some variation. If I had not read the info on the demo first, they could have told me that these were Norwegians.

All demands are met; the drumming is simple yet supportive of the music, the guitars tuned in the right cold way and the vocals crawl with misanthropy. 4 songs in the style of Norwegian black metal from the legendary mid nineties, played with enough variation and without unnecessary frills; just the way I like it. The only thing I am missing is a bit of an own identity, yet who cares; these guys were at the moment of recording this demo together for only a year, so I would love to know their status at this very moment. They have every element of becoming a well known band in the international scene… (Neithan)