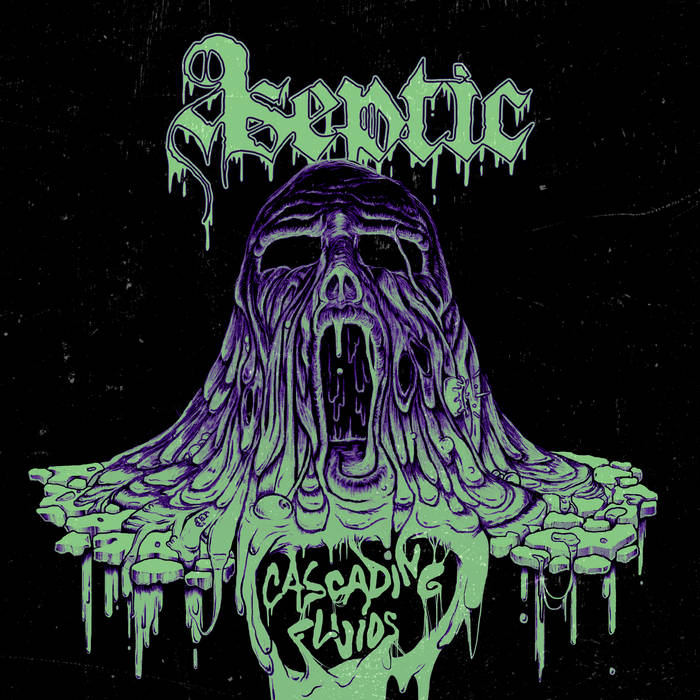 Woke up. Some crummy pub’s bathroom, the taste of caked bile in my mouth, the filthy walls where people profess their love and hatred at different point of a night, the music so loud the walls can’t even muffle it, the smell is there to finish the job, my senses are filing for assault. And I wonder in between stomach cramps: How the fuck did I end up here?

I think it all started when R. handed me this tape, it was black with a green/purple artwork, representing some form of slimey figure, it read Aseptic (probably the band’s name) Cascading Fluids (probably the title, according to the layout) pretty much everything about it screamed Death Metal and I gag every time it springs back to mind. But anyway, ordered a fat pint and started listening to the thing, aaaaaaaaaaaaaaaaaand… it’s got an intro. Some people hate those but I don’t, if it’s done right it can really add to the atmosphere. Now I have to say, it sounds just like an audio version of the artwork, so good job there, dunno if those disgusting sounds are synths or someone just shoved a mic in some part of their anatomy, but hey! Sometimes it’s best not to know! Then the buzzsaw guitar comes in, dooming a bit, the fat drums are thundering and they throw you right into “I Rot Away” with its groovy riffs and vocals recorded in a cave. No doubt, it’s Death Metal! Very vibey, proper mid tempo goodness except for the galloping bridge, sounds just nasty. Clocking at just over 2 minutes and 30 seconds it is the second longest song on here, very effective, and I couldn’t get enough of it so I had it on repeat for a bunch of times, goes really well with cold cheap beer. Let me grab another one before I start rambling about the rest.

“Festering Orifices”… OrificeS… plural. Now I don’t have the lyrics at hand but I wish I did. It starts with the weirdest intro… some sort of clean talking? Then pummels you with a smile. I have to say, that first riff is going to dig holes in your skull all the way to your soul. It’s a bit of a faster tempo for that song, but worry not! It still has copious amounts of groove. I wonder for a moment in between gulps of Astra, was this recorded live? Sure sounds like it to me, and I mean that in the best possible way, it sounds like a band playing, you can almost smell the sweat (especially the drummer’s, that guy must be drenched at the end of a show)! Feels like you’re in the same room, and that room happens to be a cave. That can be a divisive choice, the production is dirty, filthy even, the sound is kind of muddy, but it suits the music very well in my somewhat inebriated opinion (started doing shots around the 3rd listen).

“Cascading Fluids”, the title track. Skanking drums and fast guitar? Fat bass? Bit more than a minute and a half? Sign me up for that one! And my urinal neighbour is currently vomiting which is a very creative use of the object and quite fitting at the same time! I like those slower parts, will make you bob your head until the end of the song (banged mine against many walls too), or close, they bring the savage riff back to finish you off. It’s a just a banger, would love to see it live in a packed room, sounds like a riot, quite literally.

A volume jump is here to greet you on “Addictive Reek”, closer of this demo, it’s weird, not sure if that’s intentional or not. I don’t really care to be honest, it’s my favourite song. It’s got everything Aseptic can do, the speed, the groove and the slow almost solemn part towards the end is pure slime. I am not just saying that because of my bleary vision or blurry eyes (or whatever combination of words you can make with this sentence), it’s just great. I can’t understand a fucking word of those vocals, but they are put to great use, sounds like a rabid mutant holding a political meeting in the sewers! And you know what? This guy’s got my vote! Fully convinced, will even donate money to the cause, whatever that is!

The synths are back to bring the end to the beginning, full circle style, forming uroboric shapes as I pass out in a pool of vomit, thanks for the moment Aseptic, it’s been real. (Nezu)