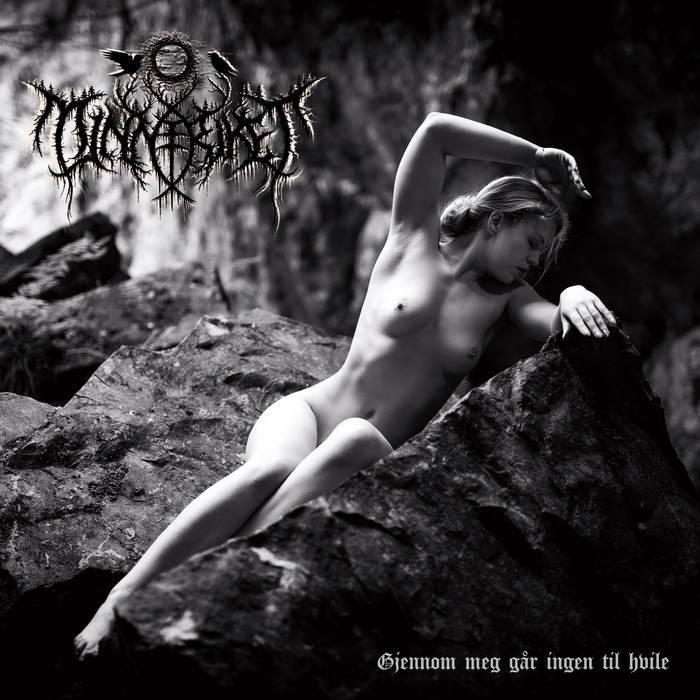 A thought provoking and wonderfully canorous new album from Minneriket, (Memory Kingdom) ‘Gjennom meg går ingen til hvile’ (Through me no one goes to rest) is an expansive and deeply creative opus and the brainchild of Stein Akslen (Blodsgard / Æra / Vakslen) who since 2014 has been creating poetically evocative music through this vassal, and this self released offering is his fifth full length to date. Weighing in at just short of an hour in length, Stein has a lot of space to fill and he does so with myriad styles and influences, instrumental pieces and soaring vocal ranges. Despite this being a solo venture, there are guest vocalists used to provide soft, haunting lullabies during opening track  ‘Så kald en jord’, (Such A Cold Earth) as well as powerful operatic overtures in ‘Begravelsens hjerteslag’. (The Heartbeat of the Funeral) In addition to Steins own rasping vocal style, there is also cleaner, male vocals to contrast his own raw style.

Musically there are a vast array of instruments and guest musicians laced throughout this album, including flutists, a cello play, guest percussion, a saxophone and a whole lot more. As the name of the album surely hints at, this album is a very mournful and sombre affair. With every track a bleak melancholy drips from the speakers until a constant dark stream of raw emotion and gloomy residue flows into your brain. There are contrasts to this though, such as the fast, flowing guitar rhythms, upbeat drumming style and dual vocal approach of ‘Regnbuer i gråtoner’ (Rainbows In Shades of Grey) which despite the name, really does uplift the mood of depression when compared to the three tracks that came before. As if to sit in juxtaposition to that, this track blooms the further in you travel to become a deeply atmospheric and passionate affair.

I find that a lot of the absorbing melodies, multi-instrumentalist tracks and overtly sombre moods are more synonymous with Atmospheric Doom Metal than with Black Metal, but whilst there is a touch of Doom hidden away in the folds of this album, it is truly a Black Metal affair, and entwined around all of the soaring harmonies, funereal dirges and lilting melodies are some forthright urgent guitar tones, harsh drumming patterns and inhospitable vocals. Do I think that this album will appeal to the kvlt elitist Black Metal fans? I do not! However, for those of us who like a kaleidoscope of sounds, a mixture of styles and a plethora of dismal sounds, all performed to an extremely high standard, then Minneriket and ‘Gjennom meg går ingen til hvile’ is a worthy experience.

(If you would like to know about the various session musicians and vocalists used for this album, check out the Bandcamp link below this review as they are all listed. They did a superb job on this album.)