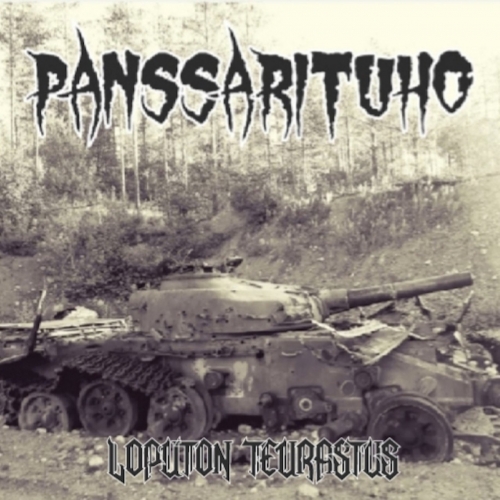 In 2021 Finnish Death Metal band Panssarituho returned with a self-released debut full length album. I stated in my review of their second demo that I’d like to hear a better mix so that all aspects of the bands sound could shine equally. Congratulations then on cleaning up the production without losing the grimy quality that gave Panssarituho a certain rawness on the demo. Here, both the thundering tones from the drums and the harsh rattle from the vocals can be heard clearly whilst both maintaining a murky quality. Something else that Panssarituho have improved upon from their demo stages is the sheer level of brutality. Whether it was always present and simply lost in the mix, I’m unsure. Now though, full frontal Death Metal assault is the order of the day but with enough space within the album for some good old fashioned guitar based wankery in the form of well placed and nicely executed solos.

I’ve always been a fan of good bass play. (I remember watching Vacivus in Glasgow and spending the entire set watching the bassists hands as he went about his business) So the bass leads going into the title track, and the pronounced levels of bass play throughout the track excite me, as well as more fierce guitar solos and the ever present mauling from the sticksman! Another thing I’m a big fan of in Death Metal is an air-raid siren. Step into the breach ‘Kadonnut’ then to tick yet another box of things I want to hear. It feels like they made this album just for me! Bless em! Panssarituho employ a far slower pace during this track leading to a weightier sound, and once more the omnipresent roar from the bass, as well as more lavishly technical flourishes run rampant throughout.

Love this album, love it’s variety and its brutality, it has a spontaneous feel to it in places and the production is far superior to the demo, which I suppose you would expect. Never the less, a great album of sickeningly thick sounding Finnish Death Metal savagery! (Luke Hayhurst)