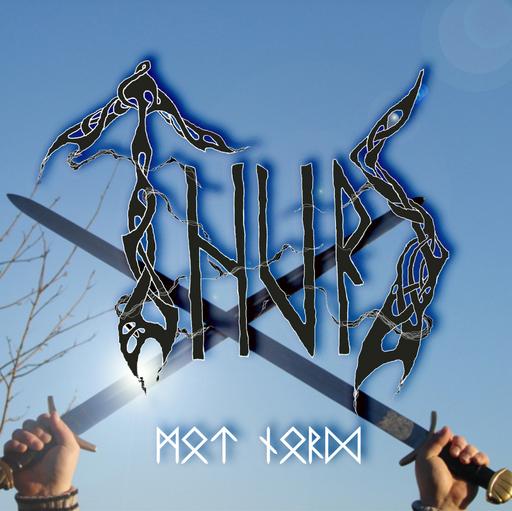 In all honesty, I was attracted to this Thurs demo, “Mot Nord”, on the strength of the band’s promotional photos, the choicest pick of which is featured on the back of the liner booklet, and involves two members having a sword fight while the others look moody, cradling guitars. What can I say, I’m a sucker for ridiculous Vikings. It was a pleasant surprise, therefore, to discover that Thurs are Vikings more in the Enslaved sense of the word, and are able to pack quite the black metal punch alongside their rousing paganism.

Opening track “Nord for Asgard” and closer “Skogens Grusome Sang” embody a grooving, energetic kind of heroism, which, while it may flag slightly in terms of tempo in the middle, stays interesting with frequent and dramatic breaks, well-written bass lines and perfectly-timed drum fills which will keep you banging your head appreciatively for the duration. Draugr Skaldvard’s raspy vocal delivery keeps things nice and grim, and the grooviness occasionally subsides to make way for a more distorted, early-Mayhem tone.

“Slaget” is a slightly different species of beast, more depressive with a brooding, slow pace and ill-tempered bass break, but still decidedly drenched with the pagan spirit, as the rousing cries of “Odin!” towards the end make clear. In all, it is clear to see, through contrast of this central track and its two adjacent numbers, where Thurs are headed, which is towards a nice, coherent mixture of classic black metal and clenched-teeth Viking aggression, laden with heroic groove. That we have to deduce this from a contrast of tracks shows that they’re not quite there yet, but if they continue to put this much effort into their song structuring, and work on their already catchy riffs, they could soon be stomping the same battlefields as the likes of Amon Amarth. (SFK)