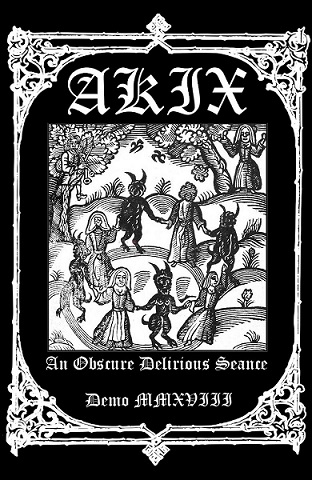 Back in 2018 a demo release slithered it’s way out of Brighton, England and to date has not been granted a follow up. That demo was ‘An Obscure Delirious Séance’ and the band were Black Metal trio AKIX, who feature members of Aklash and Wolvencrown. In 2020 Analög Ragnarök breathed fetid new life into the demo by re-releasing it on cassette and giving a fresh lick of paint with the impressive artwork you see here, (The original cover couldn’t even be called artwork) but to date that is all she wrote for AKIX.

With a straight forward Punk influenced lo-fi sound, opening track ‘Becoming the Demi-God (Invokation I – Manifestation of Abstract Conceptualisations)’ is mired in a thick almost impenetrable gloom that hides a multitude of carnival like synth undertones, snarling growled vocals and a relentless barrage of drum tones and hostile guitar leads, and whilst this is very much a simplistic sounding demo for the most part, it does have it’s charms. Or at least it did until it was ruined by multiple spoken word passages that are clearly intended to add a ritualistic feel to the demo but ends up sounding like a teenager trying to be evil.

Sadly this theme then continues throughout the demo and ruins any chance I had of enjoying this. I guess that this demo acts as somewhat of a testing ground for the members of AKIX, as Aklash are a more than decent band and Wolvencrown are one of the best on the UK scene in my humble opinion. And ‘An Obscure Delirious Séance’ does have its moments, especially the synth work which I found rather fun. I can however see why the band have not re-visited AKIX since 2018. (Marksson)