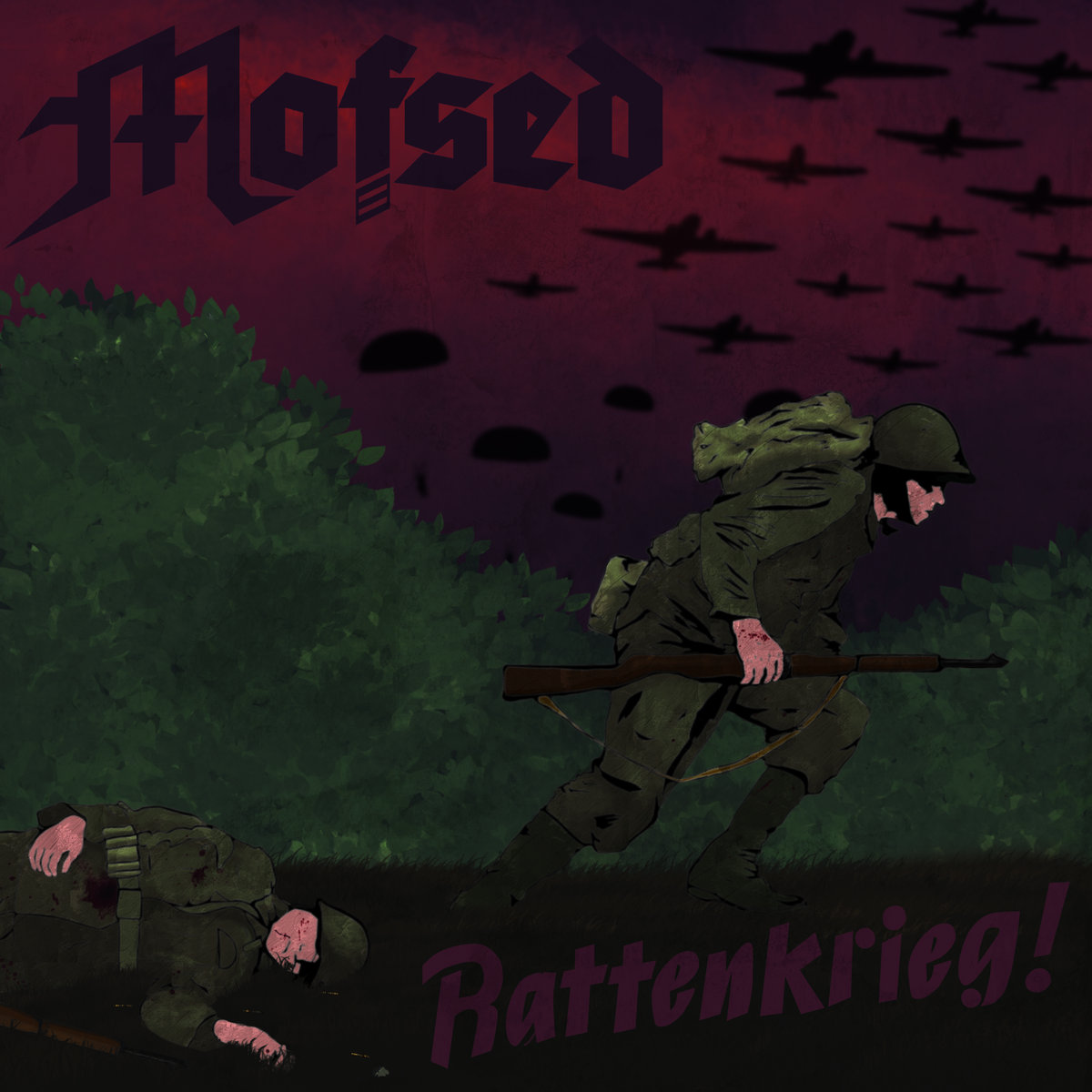 Ricardo and I have this certain way of working together. He sends me stuff, I look at the names and say never heard of them quite a lot, and then because he knows me rather well I end up saying “Fuck yes! This is awesome”, when I opened my file recently to see what goodness he had decided to share I saw the name “Mofsed”, and then said “Never heard of em”, but after the first spin, the very first song to be precise, I then repeated my usual line, that being of course, “Fuck yes! This is awesome”

Now, for the unknowing, Mofsed are an American Death Metal band, that to me much like another American favourite of mine, Scaphism, contain a healthy dose of thrashing madness in their mix, as you will soon see. The actual meaning of the title of this album, “Rattenkrieg”, is a term coined by the German forces that got into some of the close quarters, nasty, down and dirty fighting with their opposing Russian forces during the Battle of Stalingrad during WWII. You know, the kind of street by street scuffle where it’s pistols at five paces, shovels and bricks and bits of wood are used to batter in skulls, and grenades are thrown into the enemy at such short range that the resulting explosions take out your own men as well. Nasty stuff.

And a well thought out title this is. Of course it contains a lot of songs pertaining to the taking of other people’s lives in the belief that your lot are better than their lot, and right from the get go, this is one is just simply a bayonet to the throat and a quick kick in the back to get you off said blade as it plunges again and again into your prone, soon to be deceased body. Track one “Rattenkrieg” (fancy that), has an almost Sodom (Agent Orange springs straight to mind) like delivery, especially in the vocal department, and there is nothing whatsoever wrong with that, a fucking classic album to this day. It’s all about spitting venom, kicking dirt in your opponents face and then taking out one of his eyes with a sharpened stake.

Other references can be easily found, some of the solo’s on the titular track, and, well many others have a real Exodus type quality to them, and track two “Dawn Patrol” is the kind of thing you will just eat up like you did “Tempo of the Damned” if that was your kind of thing, and it certainly was for me. Having said that, this is not just a carbon copy, Mofsed keep it all moving well and truly in the direction that is going to damn well win them any battle, no matter how nitty gritty and low down dirty it may be. The third track “Tokkotai”, which was a term used to refer to the Japanese Kamikaze pilots, them mad buggers that crashed their planes into anything and everything to achieve their objective, has so much bounce and groove at the beginning of it that you will be looking out your window in fear of one of them crashing into your humble abode. It then just becomes a flat out shitfight of epic proportions from there.

No need to hit the skip button here at all folks, but when you get to track number vier, or четыре (Russian), or lets just call it four, “Grotesque Procession” you will get a nice rousing little selection of raving madmen barking insanity that I have been reliably told has been taken from a few different beheading videos. Just plain nasty, and then the fun continues. The fifth little ode to mankind’s stupidity, “SIlent as the Grave”is nothing of the sort. Silent that is, because this is yet another jackboot to the temple, and the last thing you will ever hear is ‘Sieg Heil’ before you drift off into the unknown.

I could, quite easily, go on all day about this release, such is it’s excellence. This one is a Mauser (pistol) at point blank range in your spine, a Stielhandgranate (grenade) that suddenly arrives in your loungeroom and goes off with, well, a rather fucking loud bang. This can be compared to many a thing, but that would be underselling it’s magnificence. You simply must have this, or I will declare war upon you and your family, and crash a rather large plane into your residence, and that will really ruin your nice little Sunday gathering now won’t it pal.