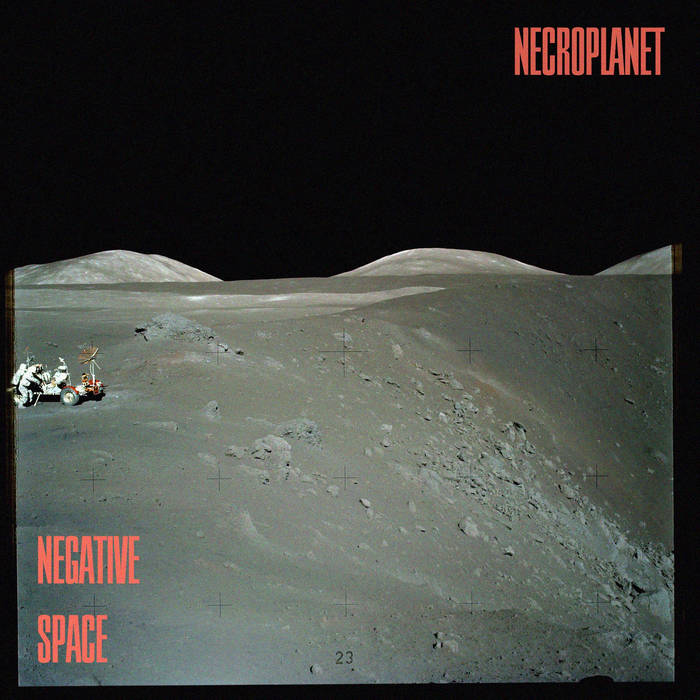 This duo, who have already gained quite a bit of experience with various other bands, bring on their first, self-released work: an impenetrable sonic assault on everything cheerful and happy. Whether they really are from Planet Necro, I don’t know, but wherever they reside, it won’t be a pleasant place.

‘Negative Space’ is a just over 40-minute clocking spacey Funeral Doom trip that takes possession of you at a slow, yet all-consuming pace. As far as I’ve been able to tell, neither musician has any real experience playing Funeral Doom, but listening to ‘Negative Space’, I wouldn’t have guessed. Unlike bands like Evoken or Mournful Congregation, Necroplanet doesn’t have a Death Metal base, but rather their music is laced with pale and slightly Industrial Black Metal. The low and driving guitars together with the icy screams of singer Aki form a suffocating atmosphere that is further enhanced by the pounding percussion. Evoking a feel of total despair, not much unlike Danish Nortt. The seven songs have been canned by both band-members, dividing production and mastering, and they delivered nothing but an outstanding job not letting the whole thing get bogged down in a confusing and chaotic mash, instead, this sounds exactly what you expect when you try to imagine how it would be living on Planet Necro.

Necroplanet proves to be a very promising new act for anyone out there soulsearching and not afraid to stare into the abyss and to a meet his (or her) own fears. If you are into bands like Esoteric, Nortt or Xasthur or any other Suicidal Depressive Funeral Black Doom (or whatever) then you can certainly propel yourself to Necroplanet.  (FelixS)