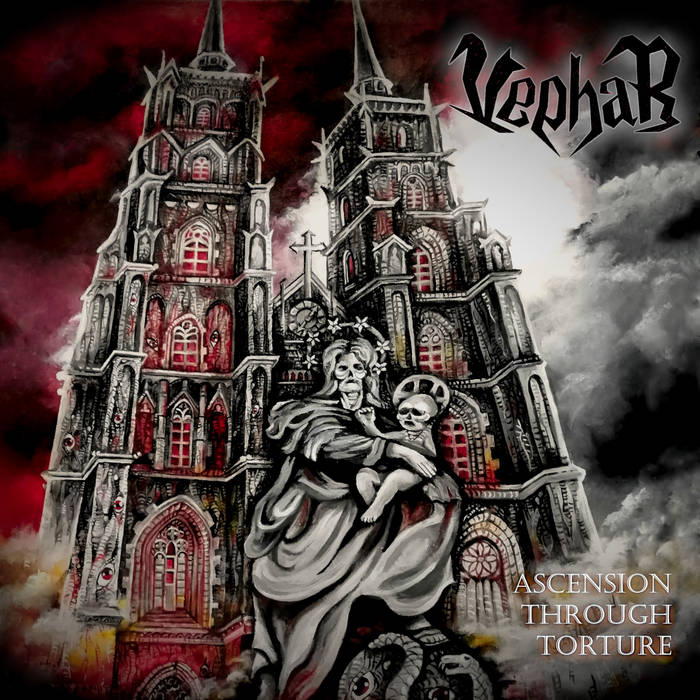 Following on from their 2021 EP, Polish Death Metal duo Vephar released their debut full length album ‘Ascension Through Torture’ at the end of 2022 as a digital only release. Now, the EP release was a very solid affair indeed, and ended with an absolute belter of a Death Metal track. This debut full length opus gets underway without any preamble and is soon battering its way through opening track ‘Darkness Particle’ at break neck speed. As with the EP, the programmed drumming patterns are blisteringly brutal, as are the guitar solos that fly out of this opening track. I like the approach to Blasphemy in this track. Not content with simply throwing out insults to those of a religious disposition, Vephar get scientific on their arses… a novel approach and one you don’t often see in lyrics. In fact the to the point words of ‘Blood Oceans’ are far more the usual level of Blasphemy, with mentions to worshipping the harlot and the likes.

‘Possessed by Light’ is a particularly brutal track; grunting bladder emptying vocal work mixed with guitar rhythms with an oppressive amount of bleakness to them, and lyrics that cut deep into the lies our society has lived by. This album isn’t all an ode to Blasphemous overtones through; some tracks such as ‘Stolen Moan’ just want to revel in bloodshed.

In my opinion the track of this album has to be the crawling, slowed down sci-fi horror that is ‘Depths of Multiverse’, which sees Vephar tread new depraved waters in both crushing, oppressive riffs, and an ripening terror of the unknown outer reaches of the cosmos. As the pace slows, the feral, predatory sound of the vocals takes on a whole other aspect of viciousness. All in all just an evil bastard of a track!

If any track fits in with the albums moniker of ‘Ascension Through Torture’ it has to be the sadistic and gruelling ‘Thalidomide’. For those of you that don’t know, Thalidomide was a tranquillizer that was used around the world. It went on to cause mass deformities in the 60’s and 70’s in new born children and was described as “the biggest man-made medical disaster ever”. The song itself explores the greed and deceit that caused this appalling wave of horror, and let me tell you that no grisly detail is left out. Great track!

‘Ascension Through Torture’ is a brilliant and gruelling debut album with some horrifying yet wonderful stand out tracks. This is an album that will live long in the memory even if I never hear it again, though there is little chance of that as its going on the playlist! If ever an album needs a physical release its this. Cassette or LP will do nicely!