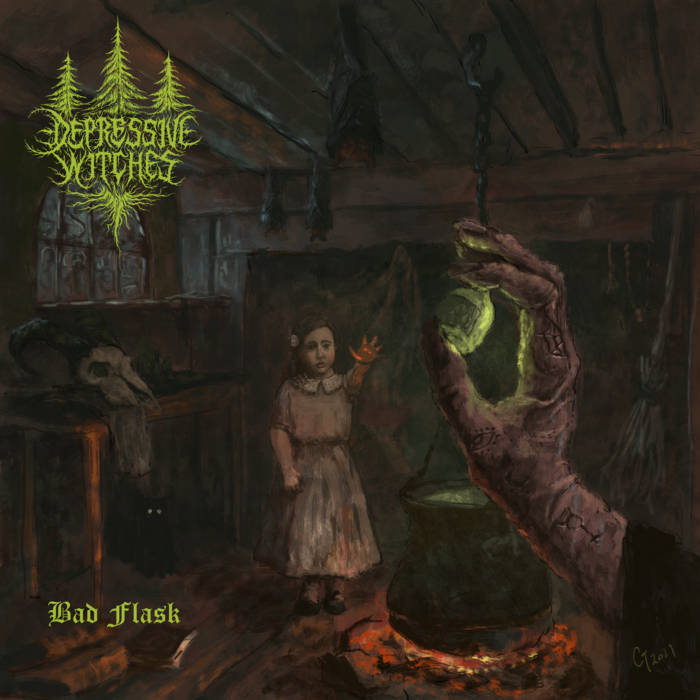 Anyone here who has been around a bit longer and knows the Black Metal scene of the 90’s will remember the video clips of the likes of Immortal and Hecate Enthroned. Where the music should be entertaining enough, it were those videos that provided extreme hilarity. Whereas Immortal certainly later became an increasingly clownish parody of itself, those first videos were certainly not meant to be ‘funny’, but were patently so. Some were even subtitled by ‘fans’ with all sorts of jokes and became something of a cult hit. Those music videos clearly undermined the musical content and certainly the intended ‘evil spirit’.

With a band name like Depressive Witches, an album that bears the name of ‘Bad Flask’ makes you wonder if we are dealing with that whole situation once again. And, upon closer look a song title like ‘Medieval Strip Club’ makes you fear the worst, but then you haven’t seen the video for ‘From The Woods I Rise’, mostly shot on a sunny day you see both guys all dressed up and corpse painted playing their guitars in a forest, what, they even use disco lights to make it look ridiculous. The rather good artwork and the professionally done logo caught me off guard after all.

So, why then spending all these words and energy on a bunch of jokers? Well, quite simply put: because the music is quite impressive. While some bands from the mid to late 90’s had meant their videos to be taken seriously and with that, their music too. These two French scallywags don’t take themselves seriously, but they are able to pull off some great music. Basically they are offering a good blend of later Immortal and some the more Bathory-esque and also Abbath fronted I. There is a bit of that Inquisition vibe too, but then again, Inquisition is also primarily based on that Immortal fashioned Black Metal. It also has that rocking and almost buzz-sawing kind of riffs and equally basic rocking drums, blending well into very catchy songs. In their most rocking parts, a comparison with a band like Carpathian Forest or even Urgehal is not too far off either.

If you don’t mind a little tongue-in-cheek kind of humour and can look past the sometimes bland song titles, Depressive Witches still offers you quite a nice-sounding Black Metal experience. This album was self-released on CD and is also available for streaming on most popular platforms, so, judge for yourself.