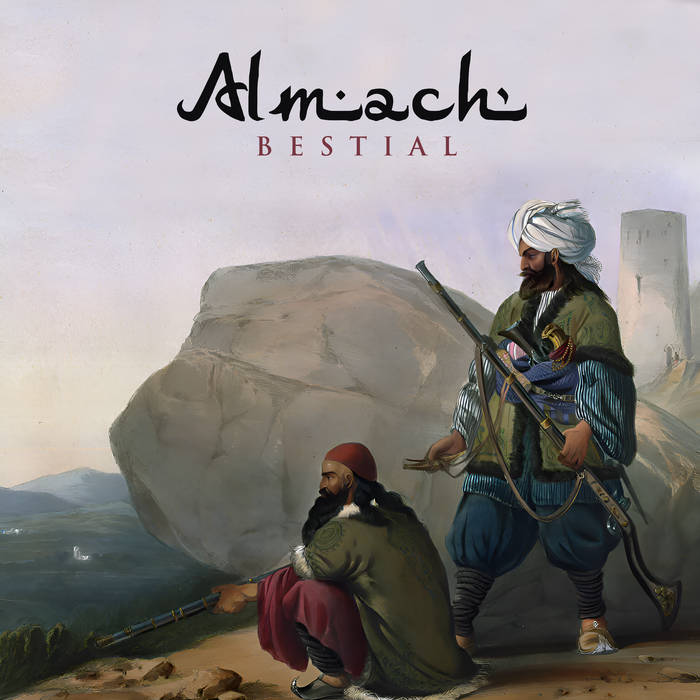 Almach is an Epic/Atmospheric Black Metal band who claims to be from the Afghan capital of Kabul, though apparently the authenticity of this claim has an air of doubt about it; I imagine due to the tight controls over the country and Kabul in particular by the Taliban. Never the less, Almach have been active since for a the last couple of years and have been somewhat prolific thus far in terms of their release rate. their new ‘Bestial’ EP is their seventh release since 2020 and comes on the back of three rapid fire full length album releases. Unlike some of their other releases to date, this EP has thus far a self-released digital release only, and sports some eye catching cover art that is mired in the countries political and historical identity. So whether Almach reside or hail from Kabul, or have since moved away from the city; clearly Afghanistan and its turbulent history is the bands underlying motivation.

Opening track ‘River’ is awash with Middle Eastern influence; from the various methods of percussion used to the vast array of vocal styles that run the gambit of exotic and melodic tones. There are moments within this opening track where a satisfyingly intense guitar melody takes hold, backed by a climactic drumming display, but in truth trying to narrow down this tracks myriad influences, sounds and styles is futile. Middle track ‘Ritual’ is entirely ambient and again with a high level of native flavour as well as a mix of serpentine whispers and clean, beautiful female vocals. The EP ends with title track ‘Bestial’ and as you may expect by the name, this once more flips the EP on its head and showcases Almach’s blast beat frenzy. This one is pure European influenced Black Metal, raw sounding but with a superbly catchy flow, abrasive vocal work and furious riffs.

What a mixed up and crazy EP this is. Two parts heritage piece dedicated to the sights and sounds of the bands homeland, and then one part brutal uncompromising Black Metal fury. I love this EP, a superb listening experience.