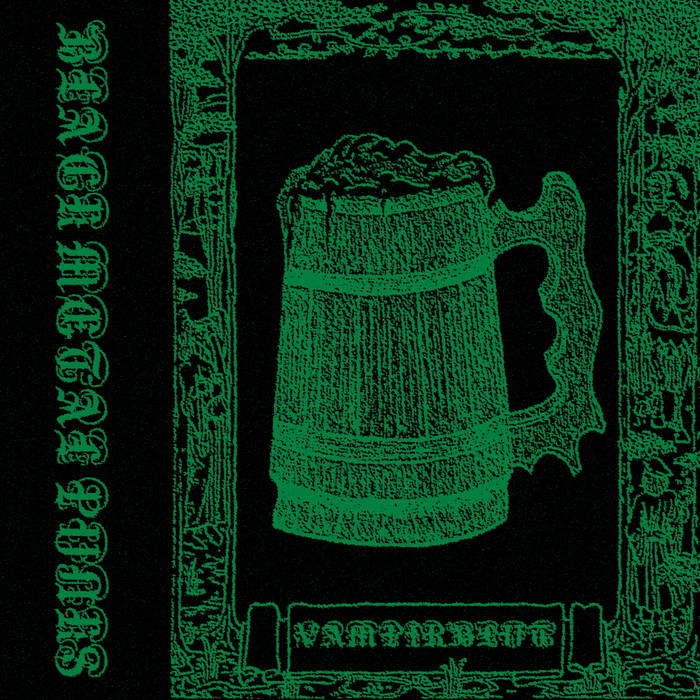 When I think of Black Metal Punk, my thoughts automatically turn to the Darkthrone records of a few years ago. Not all fans were equally happy with those albums, for that matter, some fans will always cling to the Norwegians’ (un)holy trinity of True Norwegian Black Metal. However, there is also a very large group of fans of the reasonably successful hybrid between two musical movements that have more in common than perhaps initially thought. However, what I haven’t come across much, in fact I think this is the first time, is that a band from the newly resurgent ‘vampiric Black Metal’ also embraces the punk theme.

Ray Xul, the spiritual father of Vampirblut emphasises in capital letters that this EP should be experienced when you are drunk, only to add ‘Hail Black Metal! Hail Punk!”‘, also in capital letters, of course. Well, I am not drunk, but I still ventured to give this EP a few listens. Maybe it’s because of my sober state, but I can’t really detect the Punk in this. I hear no UK Subs, no Misfits, no Dead Kennedys, no Exploited, no Stiff Little Fingers… What I do hear is Raw Black Metal of a fairly minimalist nature. The shrill sound of both the guitars and the basic drums and the reasonably up-beat tempo may still give it a slight Punk attitude. Basically this is reasonably catchy and rather simplistic Black Metal that is played much dedication. Not quite the best thing in the genre, but it was an enjoyable listen nonetheless.

To cumulate, I don’t think this is all that punkish, possibly due to the lack of alcohol in my blood, or perhaps due to the abundance of it in Ray Xul’s. The physical cassette tapes, by the way, were released in just seven copies and therefore sold out pretty quickly. Hopefully an additional edition will be made available in a somewhat more reasonable number, if not, you can always visit Ray Xul’s digital channels. (FelixS)