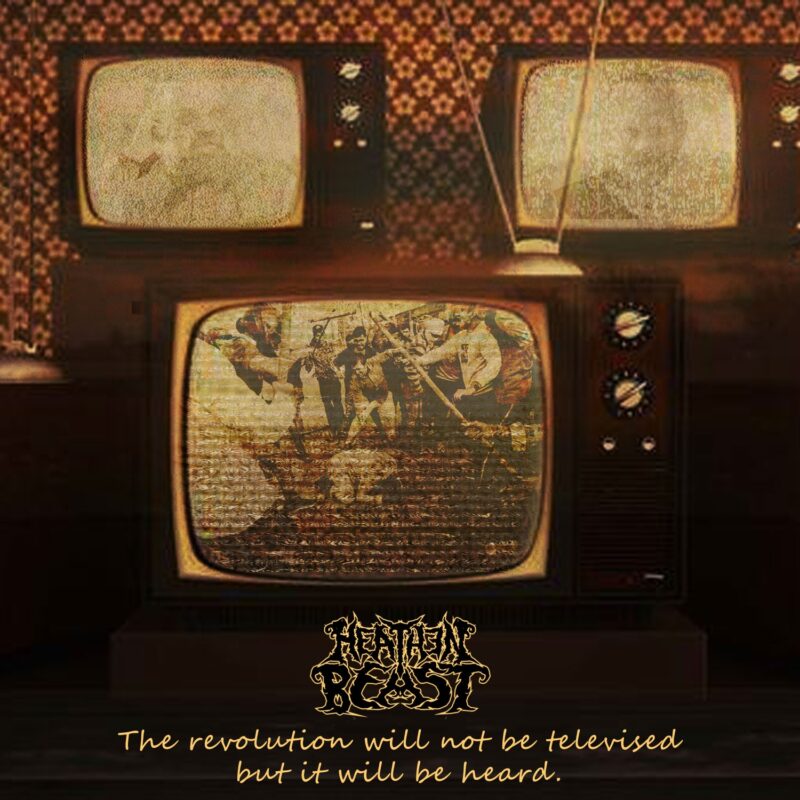 Heathen Beast is a mysterious three-piece blackened Grindcore band from Mumbai, India. The members remain anonymous out of necessity, as their music is extremely political and controversial, preferring to use  pseudonyms (Carvaka – vocals and guitars, Samkhya – bass, and Mimamsa – drums) to protect their true identities. They are as fascinating as a collective as their music is savage. Imagine, if you will, the violence and speed of Pig Destroyer or Brutal Truth, mixed with the power, cultural instrumentation and experimentation of bands like Anaal Nathrakh or Brujeria. That gives you a decent idea of what Heathen Beast sounds like, though certainly not the entire picture.

The first time I listened to “The Revolution Will Not Be Televised…” it reminded me a great deal of seeing Sunlight’s Bane at The Sanctuary in Detroit, back when shows were a thing. They had a dark energy about them, much like Deathspell Omega or Funeral Mist (which I would discover much later), that just took the breath out of the entire room (such as it was, as I recall it being a rather small crowd).

Prior to this year, Heathen Beast has released five EP’s and two singles over the course of ten years. The first three EP’s were released as a collection called “Trident” in 2015, by the now defunct India/Asia subsidiary of Transcending Obscurity Records, who also released “Rise of the Saffron Empire” and “$cam” in 2015 and 2016, respectively.  2018 and 2019 the band self-released “Bloody Sabarimala” and “Fuck All Religions, Equally” as singles, and choosing to self-release again this year, they unleashed “The Revolution Will Not Be Televised But It Will Be Heard” upon the world. That’s a hell of a lot of output for a band so situated in the shadows.

The political and social climate in India is quite complex, which shows off Heathen Beast’s genius in covering an astonishing amount of historical ground in short, catchy, easy to digest snippets of brutality. These complexities can all be observed within all of their song titles. “Bloody Sabarimala”, “Fuck All Religions, Equally”, for example, and “Fuck CAA”, and “Fuck NPR & NRC”, the latter two songs being the opening tracks of the new album.

The unmistakable mixture of anger and pride is represented by some of the best blackened grindcore you are likely to come across, no matter which continent you’re listening from. Additionally, you don’t need to understand the background on any of these songs to enjoy the hell out of each one, which keeps music the focus and ultimately unifying factor.

Perhaps it is best to consider “The Revolution Will Not Be Televised But It Will Be Heard” a call out to each of us, and by doing our jobs as listeners we are providing a safe space for differences of opinion to exist in their most vulnerable state: untouched and without inapplicable obliqueness, surrounded by a storm of questions and some of the heaviest sounds known to humankind. It is an awesome record with madness and passion for days, and recommended listening of the highest order. (VUK)