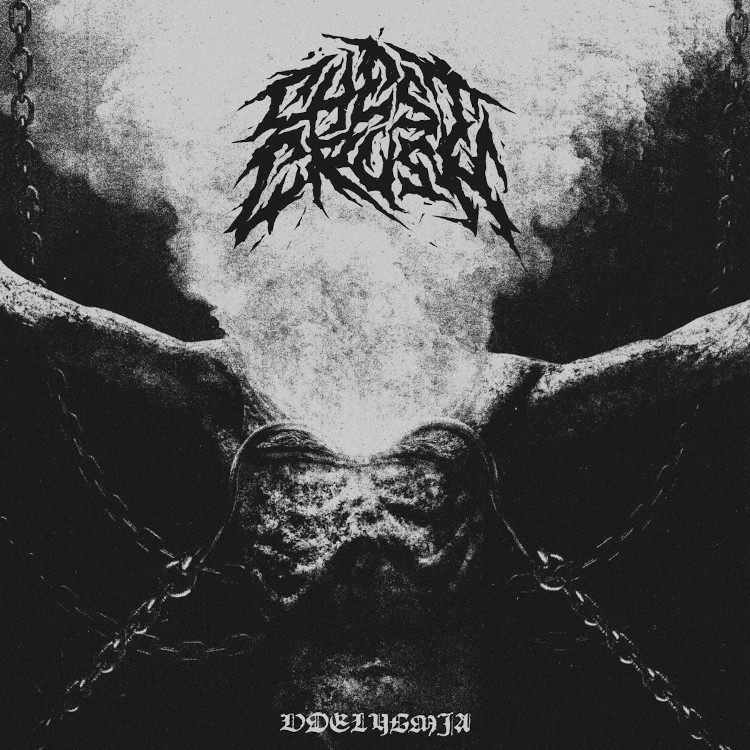 Relentless hate and malice poured into a living vessel, these are the words that I would use when painting a description of this debut album. Chestcrush births their first offering in the form of a full length, titled, “Vdelygmia” and before I dissect this creation let me first say, its bands like this that make the journey into discovering newer obscure releases so much worthwhile. This legion hailing from the UK mixes a concoction comprising of aspects existing within Black Metal, and Grindcore with veins extending into some areas of Sludge and Hardcore, usually when stitching together these different elements it may be convoluted, but it’s the imperfection in the mixture that highlights the many positive traits within “Vdelygmia”.

The overall production of the album secretes a morbid, pulsating almost throbbing atmosphere with its unpolished demeanor in the way the guitars and drums are recorded, this acts as the crowning jewel upon this release. The instrumentation ranges from sludge like riffs with an air of eerie dissonance coupled with a thunderous and thick drum tone that dispels a breath of chaos with every beat. The structure of the musical patterns utilized here are built off the bones of Black Metal, but the sinew and flesh which cloaks this body ranges from metallic breakdowns as well as doom laden riffs which discharges an ominous feeling. Listen to, “Different Shepard Same Sheep” and “Burden” which unleashes a barrage of virulent musical shifts that creates a cacophony of noise.

Now you may realize I pointed out that the mix has an unpolished aura to it as well as the instrumentation possess an unpredictable primal spirit, the reason why I would acknowledged this as a positive aspect towards Chestcrush’s creation is due to the fact that you can feel the weight of emotions dripping from every note and every chord. The album exudes the energy of every negative emotion that has been festering like an infected wound over a period of time, eating at the flesh, slowly decaying as the fluids build up until it violently erupts excreting blood on other bodily liquids in a haphazard fashion, so too does the noise that engulfs each song feel as it emits that feeling of mayhem and rage, the track,, “Vothrodoxia” explfies this sentiment.

The voice that inhibits this album utilizes both high and low harsh registers, ranging from a Black Metal type raspy vocals to sometimes low, hellish gutturals. The vox on the album burrows itself deeply within the instruments, forming a living breathing wall of sound that pulsates with every shift evoking a visceral vibe. If the voices of mental decay, diving deep into sublevels of self-destruction were to be realized and given speech, I would believe it would contort to this form, this as well is another positive trait that leaves its DNA upon the album.

Overall this is an album that definitely belongs in the pool of best releases for 2021, as its simply unprocessed, untainted and untampered malevolent emotions that has transformed itself into what is displayed on this debut release. I would definitely recommend this to all fans of Extreme Metal who thrive on exploring the shades of despair in musical form. To Chestcrush, I do hope this is the first of many releases, hails! (Justin Joseph)