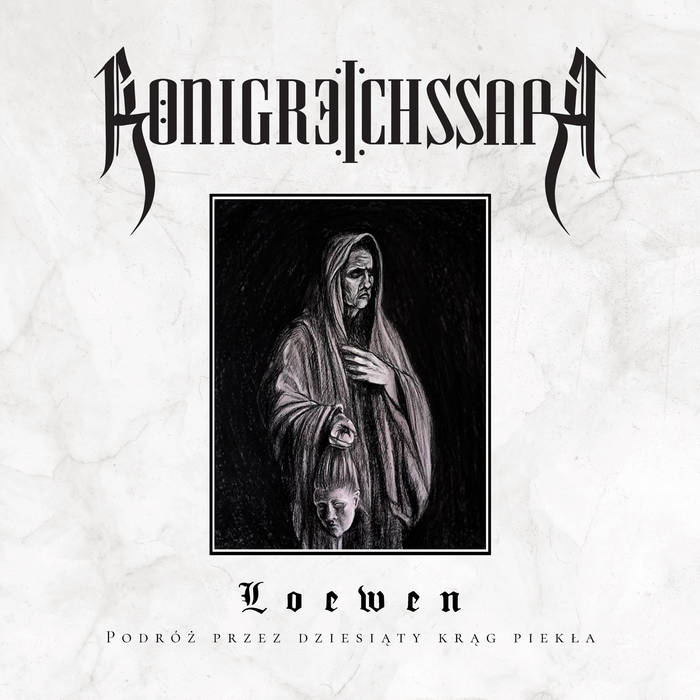 This odd Polish trio released its debut-album ‘Witnessing The Dearth’ in 2020 and returns with a self-released EP called ‘Loewen (Podróż Przez Dziesiąty Krąg Piekła)’. Since my Polish isn’t all that good, I needed Google to help me translate the title. It told me that it means ‘A Journey Through The Tenth Circle Of Hell’. If you’ve heard the debut album this is a title that doesn’t sound too far of from Königreichssaal’s musical intentions.

Just like its full-length predecessor, ‘Loewen (Podróż Przez Dziesiąty Krąg Piekła)’, is full of oppressive and doom-filled Black Metal. A very unpleasant and discomforting take on Black Metal that gets under your skin. It doesn’t sound too far away from the earlier works of Mgła, it has similar repeating and hypnotic riffs and rather static drums with all those great fills and details added for a full range of dynamics. Those dynamics are also to be found in the tempo changes and the addition of haunting dissonance which gives the music that icy feel and uneasiness. Even the barking vocals are also very much in the Mgła way. That means that the three lengthy tracks are much reminiscent to that big Polish Black Metal juggernaut, but still it doesn’t feel like a straight rip off. Its rawer sound and the addition of a bit more atmospheric elements does give Königreichssaal enough of an own musical and convincing identity to deserve its own place in the thriving Polish Black Metal scene.

While the current Polish Black Metal scene seems dominated by a few bigger bands, there are bands like this Königreichssaal that are very much worth your attention too. If you think that Mgła is getting a little too polished and lost its raw edge, you’d be welcome to check out this tasty EP.